11 Aug 2011
I rode my bike straight up out of the Ilhara Valley, and promptly descended back down on the most welcome and glorious downhill stretch of road that I had biked so far. Throughout the 6 miles that I biked that day I had stunning views of the Selime Monastery, one of the largest religious buildings in the Cappodocia region. The monastery is set into the side of the plateau and lies within a honeycomb of  hundreds of smaller rooms carved out of the rock. 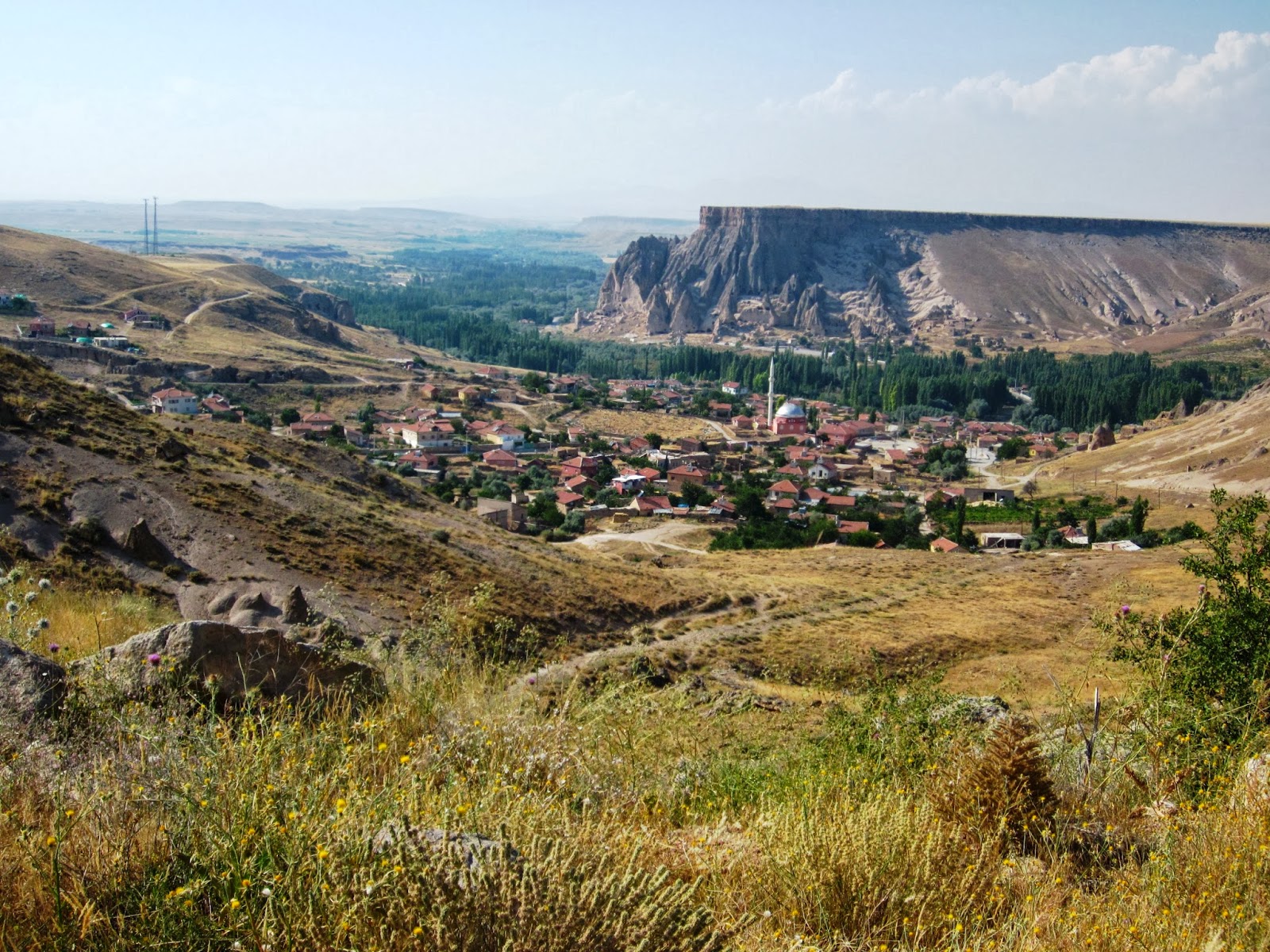 I stopped for lunch at a small restaurant by the river to fortify myself after my long ride. I started talking to one of the owners there, and not only did he let me camp in the grass on the side of the restaurant, but he said he would be my tour guide to the monastery. When we arrived the gates were closed, but my smooth talking tour guide slipped us through and we had the whole site to ourselves. As we walked up ramped leading to the inner chambers my guide explained that caravans would seek refuge here, so the hallways had to be large enough to accommodate fully loaded camels. Every single window, arched doorway, and stairway had been carved out of the rock and the walls, though smooth to the touch, upon closer inspection had millions of tiny scratch marks from hand held chisels. 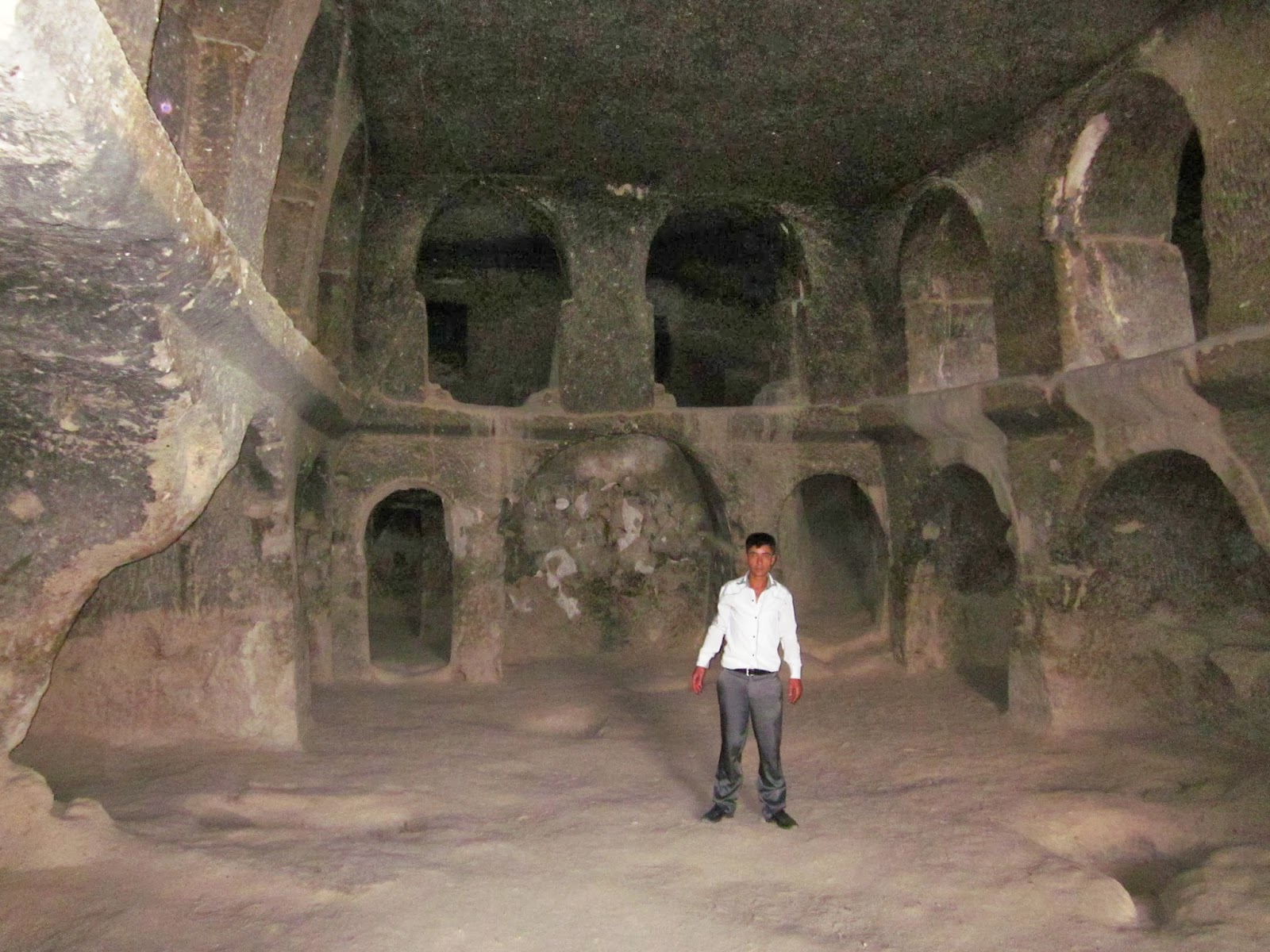 My guide turned to me and asked, "Are you brave?" I scoffed at him and followed him through a gated hallway to a narrow staircase. The stairs became a stone ladder, a ladder with drooping rungs covered with sand. Up and up it wound, every now and then an opening would be carved out of the wall that looked down at the valley floor. As the stairs became steeper small cups had been carved into the sides as handholds. Feeling not so brave at this point I tried not to think of how on earth I would get back down. 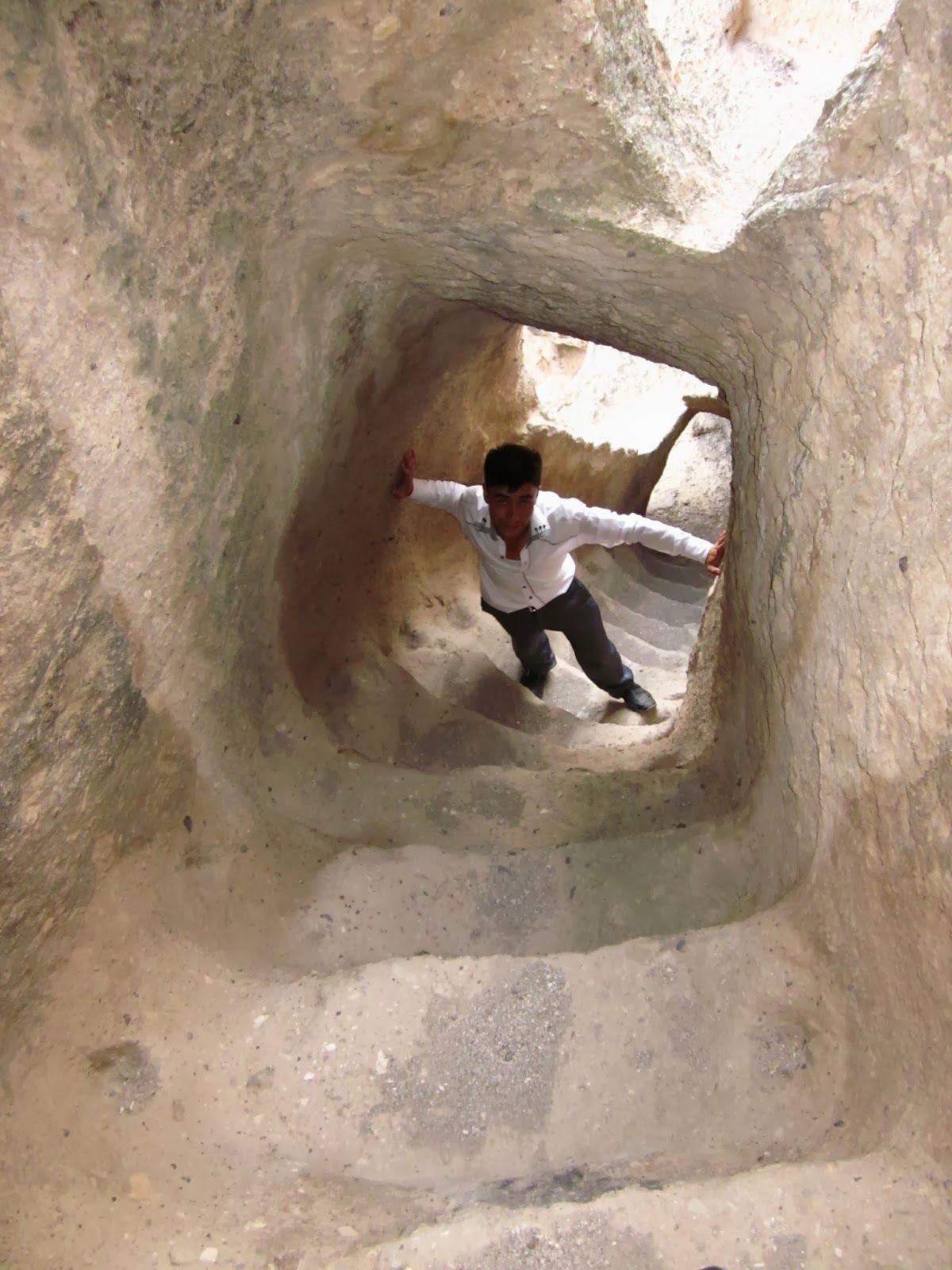 Thankfully the stairs ended and we walked to a chimney. My guide looked at me with a twinkle in his eye and pointed up. "You first" he said, "That way you have something soft to land on if you fall!" The chimney was four feet across and sixty feet tall. There were scoops cut into the wall on each side for my feet and hands. With a gulp I worked my way up, stemming my feet the width of the chimney one foot at a time. One belly-flop and a wiggle brought me to the top of the landing. The no guard rail, super exposed, sand covered and sloping downward landing. On one side was the gaping hole I just crawled out of and on the other was the sunset view of the entire Ilhara Valley hundreds of feet below. "Move Over!" My guide called out, and I inched slightly farther out onto the landing. "I didn't think you would go up" he said as he climbed up in his slip on leather dress shoes, "I think you are the first American woman who has climbed up here." That was almost enough to make me loosen the death grip hold I had on the rock behind me, almost.

Back on solid ground, My guide asked if I wanted to go to the hotsprings nearby. He said that every night people light candles surrounding the pool and it glows with the moonlight making it a magical place. How could I refuse?

We hitchhiked a ride up the road, making a quick stop so he could buy potato chips and cigarettes. At the head of the short trail leading down to the spring, a family was having a late night dinner. They invited us to have a cup of chai with them. As soon as I sat down, the round faced happy mother pulled me into a bear hug and would not let me go. She laughed and squeezed me as she rapidly asked me questions. Not understanding a word she was saying, I smiled  and said "thank you" which only made her laugh out loud and bounce me up and down into her ample bosom. I managed to extract myself after cupfuls of tea and many more squeezes and we walked down the trail to the pool.
"I will be going all open" my guide declared, and proceeded to take off all his clothes.

I was pretty sure that I was pushing the boundaries of appropriate social interactions already, so I decided that a tank top and pants was a better swim suit option for me. When I tried to explain that I was not comfortable going "all open" my guide looked at me with a confused expressions. "You did not come here to make sexy time?" He asked. Thus began one of the most interesting hotspring soaks I have ever had.

Since I most likely would never be able to have a conversation as "all open" about Turkish sexual culture again, I took full advantage. My guide was convinced that American women were strong willed and overtly sexual. He assured me that this was true because he had seen Sex in the City.  As tourism was growing in the valley so was his exposure to women with a less conservative background.This was a vast difference from Turkish women who are expected to be both publicly and privately shy and modest. We talked long into the night, until my guide, laughing so hard he almost choked, held up his hands and said,"I cannot take it anymore! You don't even know what 31 is!" We walked back up the trail and caught a ride back into the village with a passing truck. With a quick wave I was dropped off at the restaurant. I walked over to my tent wondering what on earth the next day could possibly bring.