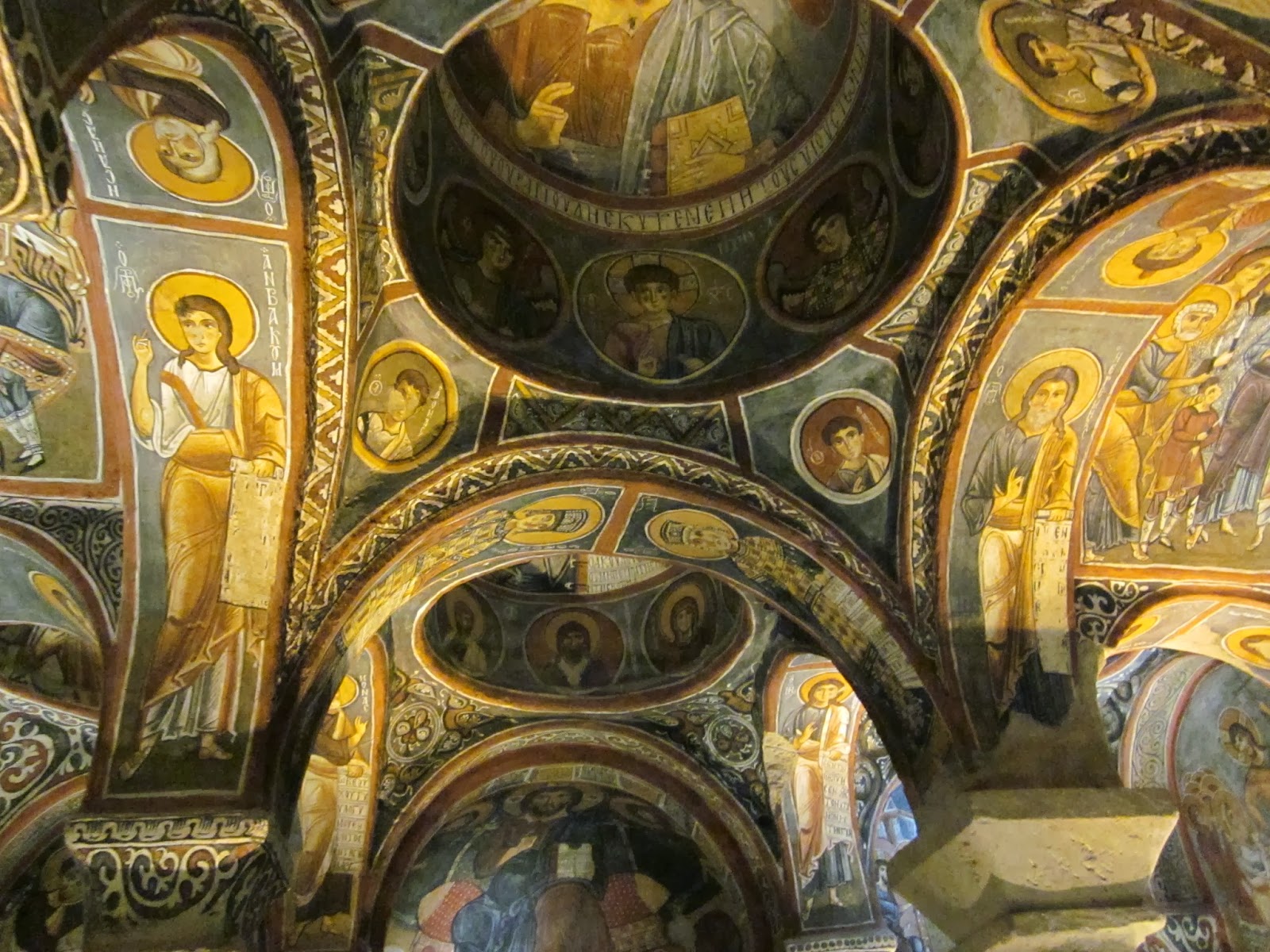 The night before I left Goreme, the hotel owner asked if I wanted to drive out to a viewpoint to watch the sunset. Not wanting to miss out on a potentially fabulous experience (the sunset of course) I immediately said yes. I walked out the front door of the hotel and there he was. Black hair billowing in the breeze as he sat astride his scooter. Thankful I wore pants, I jumped aboard. The roar of all 50cc's straining against a maxed out weight capacity was music to my ears as we buzzed up windy cobblestone roads and sandy washes to the overlook. We made it just as the sun was dropping below the hills. Suddenly the sandstone took on all the colors of a sunset and the landscape eclipsed the sky with it's vibrant show of light and shadow.

We took the scenic way back. Instead of riding the roads, we took the scooter up and down rocky dirt trails that would make me squeamish on a mountain bike.  Many times I offered to walk up steep sections, but no, no, I was assured that this was just fine. A rev of the engine and a bounce on the seat usually got us over the rocky stretches. I have never been so impressed with a motor vehicle. I vowed I would get myself a scooter as soon as I got home. With cliffs on one side and shear walls on the other, we wound our way, in the dark, back to the village. I thanked my guide and with a pounding heart I headed off to try and get a little sleep before the morning call to prayer woke me. 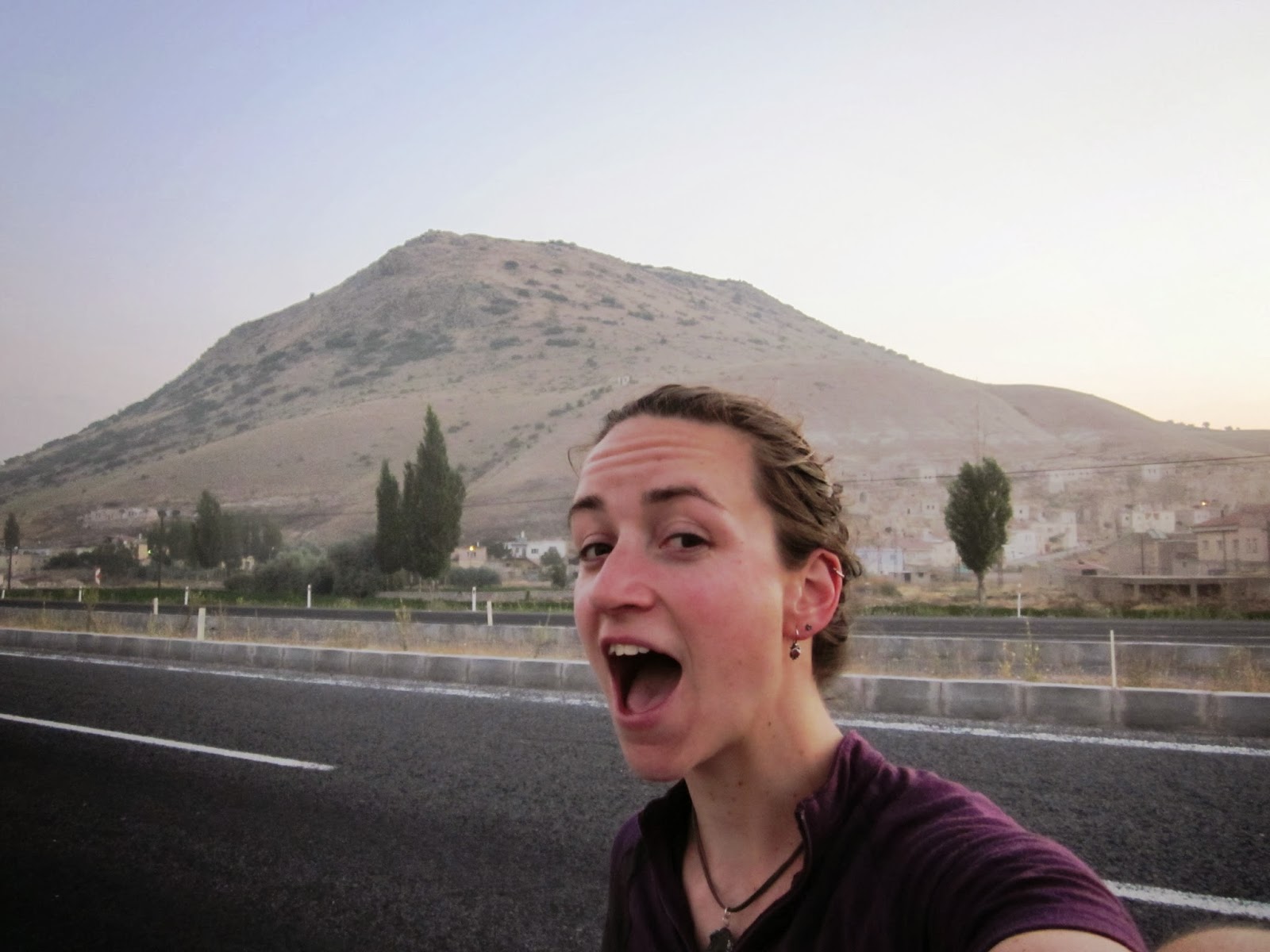 Six days into my cycling trip I had yet to travel farther than 2 miles on my bicycle. Today that would change. The average daily temperatures were consistently in the 90's. To keep my sanity I woke up at 4:30am and started my day as the morning prayers echoed in loudspeakers from the mosques in the village.

On the way to the Ilhara Valley, my goal for the day, I stopped in Darinkuyu, home to an extensive underground city.  The city didn't open for another hour so I stopped at a tea stall nearby (also not open) and without asking I was served tea, biscuits, and fruit. Not as many people spoke English as I expected so with the very few words of Turkish that I learned and lots of charades, the stall owner said he would watch my fully loaded bike as I went to go see the underground city. 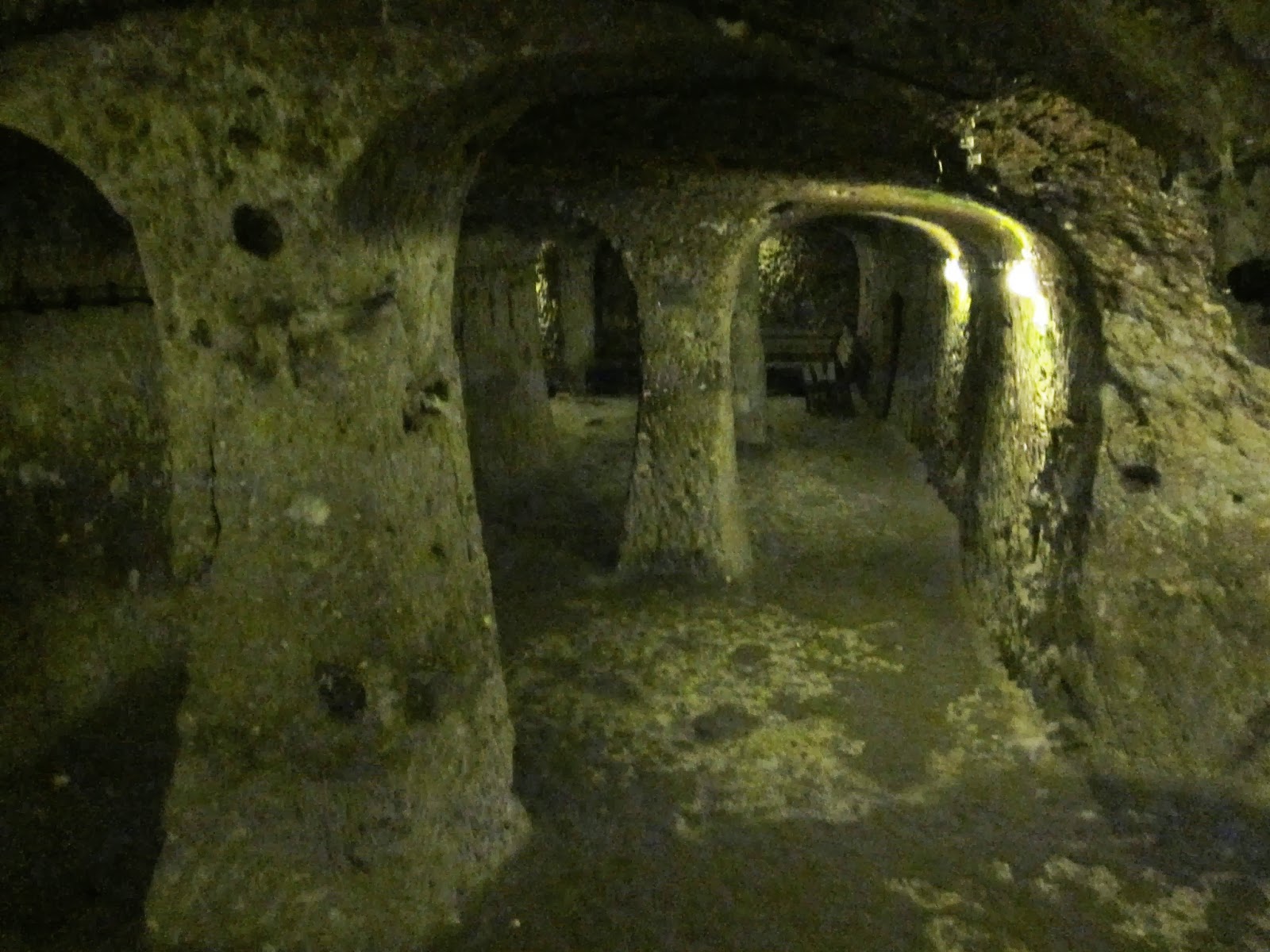 The city goes down hundred of feet but only the first 8 are open to the pubic. Since 2000BC many groups of people have used the city for protection from raiding parties, for living, for sleeping, for food storage, and for praying. Thousands of years and millions of chisel marks have created roomy chambers, tables, benches, and even a stable with feed bins carved out of the walls. The most affluent dwellers lived in the top levels where the air was fresh, lower down the rooms were smaller, the hallways more cramped, and the air was cold and stale. Walking up into the daylight never felt so liberating. 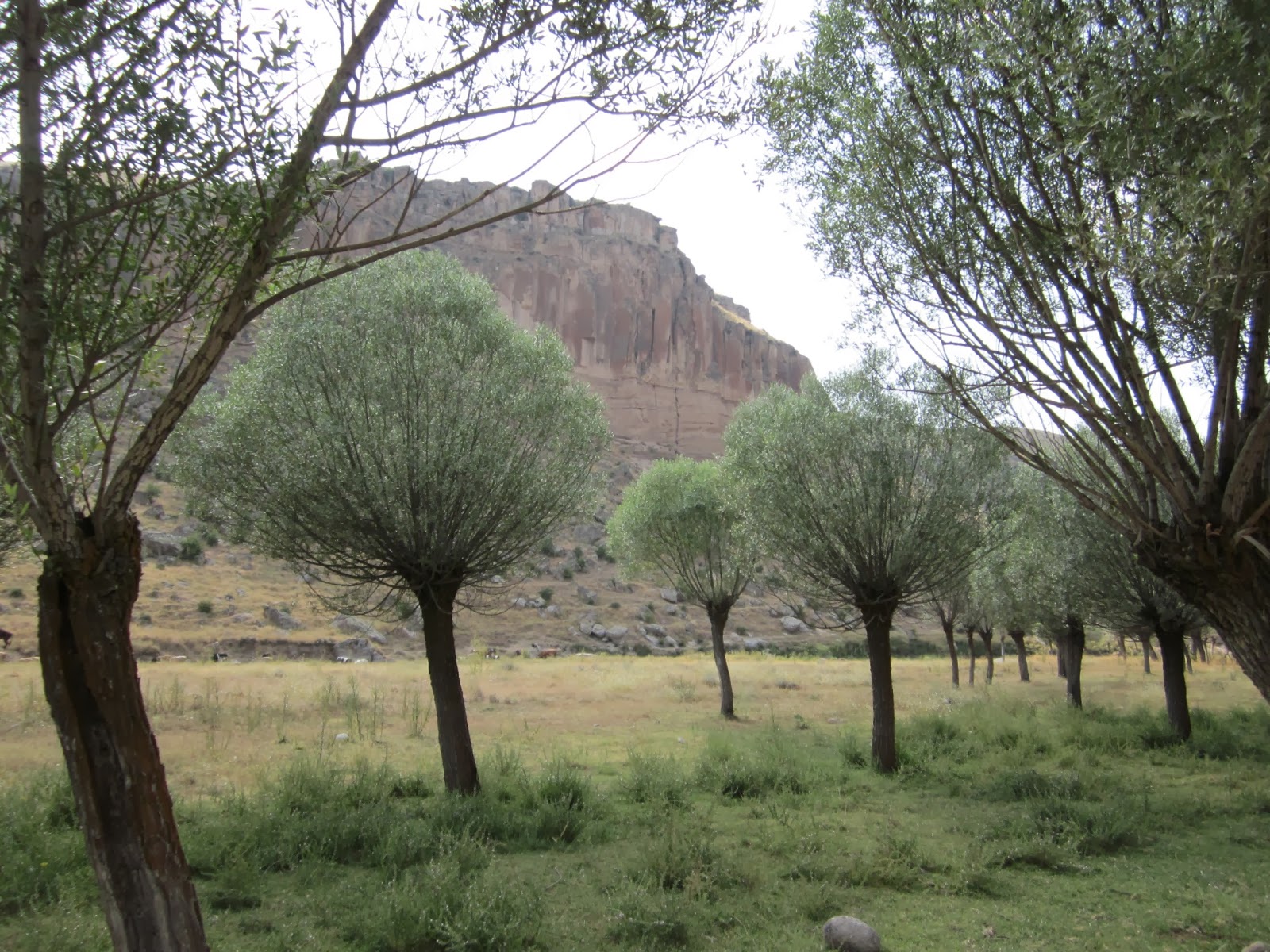 The rest of the day's ride was one of the hottest I have ever had on a bike. When I reached the river at the bottom of the Ilhara Valley, I ditched my bike and waded in up to my thighs washing the salt and sweat from my face as the valley inhabitants looked on with amusement. There was a restaurant that had cushions on little platforms in the middle of the river. You had to walk across narrow gangplanks to reach them and I asked if it was possible to stay the night there. One of the young workers smiled and told me to come back this evening, he would have my room ready. I spent the rest of the day hiking through the valley and exploring the hundreds of caves carved out of the cliffs on either side. 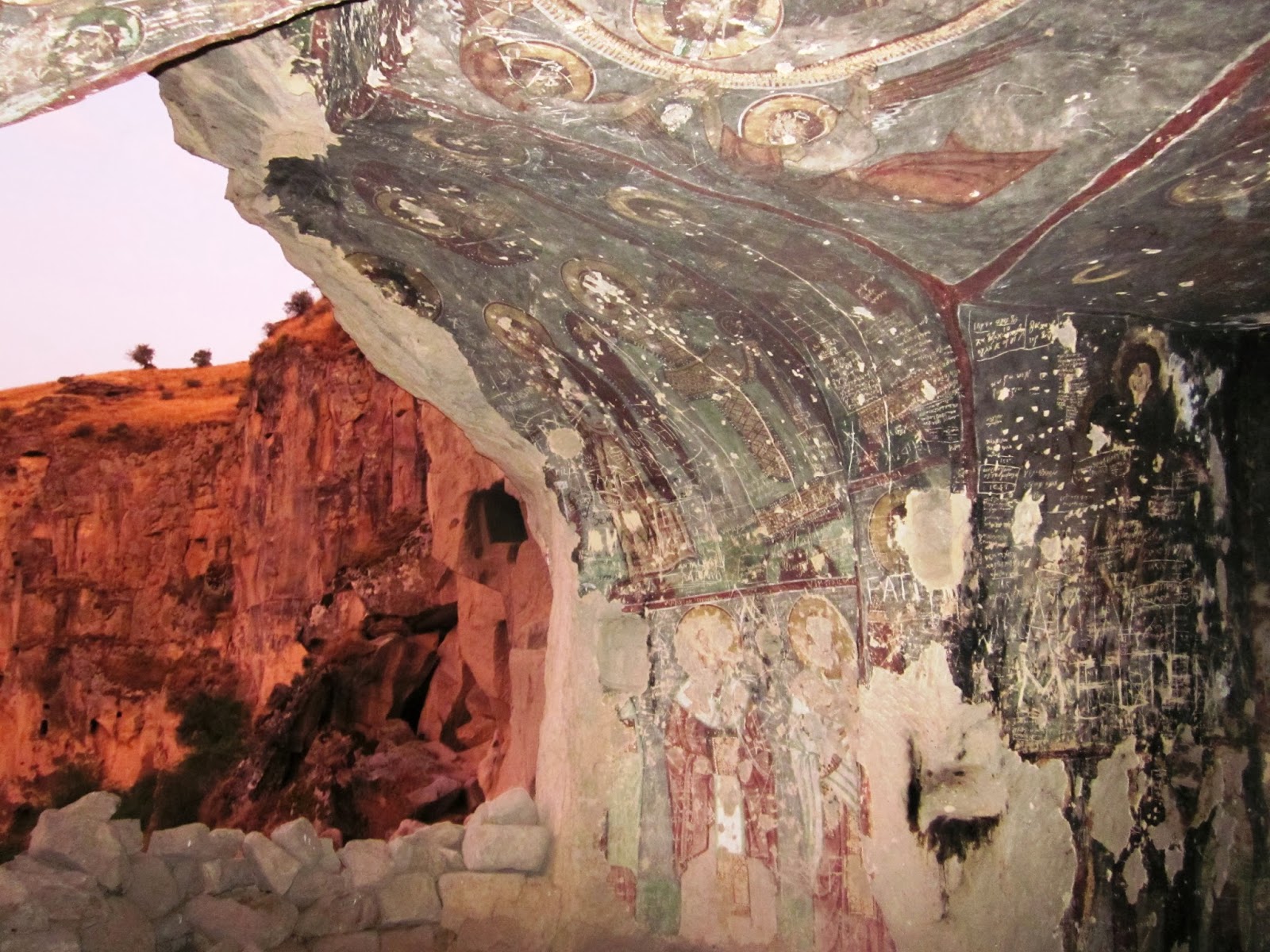 When I returned to the restaurant in the evening, the young man motioned for me to follow him. Holding a candle on a dish to light the way, he led me across a board to a small platform in the middle of the river that he had hung with beautiful patterned cloth of reds and golds to make a tent. He pulled back the opening and inside my room was lined with cushions and blankets. On a small table there was a dish filled with  little candles that cast a soft warm glow throughout the space. He waved goodnight and I  slept with the water gently flowing all around my little world.

When it was snowing sideways and daylight lasted for 6 hours, I decided that I needed to buy a plane ticket to a hot place. Once upon a time I saw a pretty cool picture of Turkey, so that was good enough for me. Seven months later I was not disappointed. 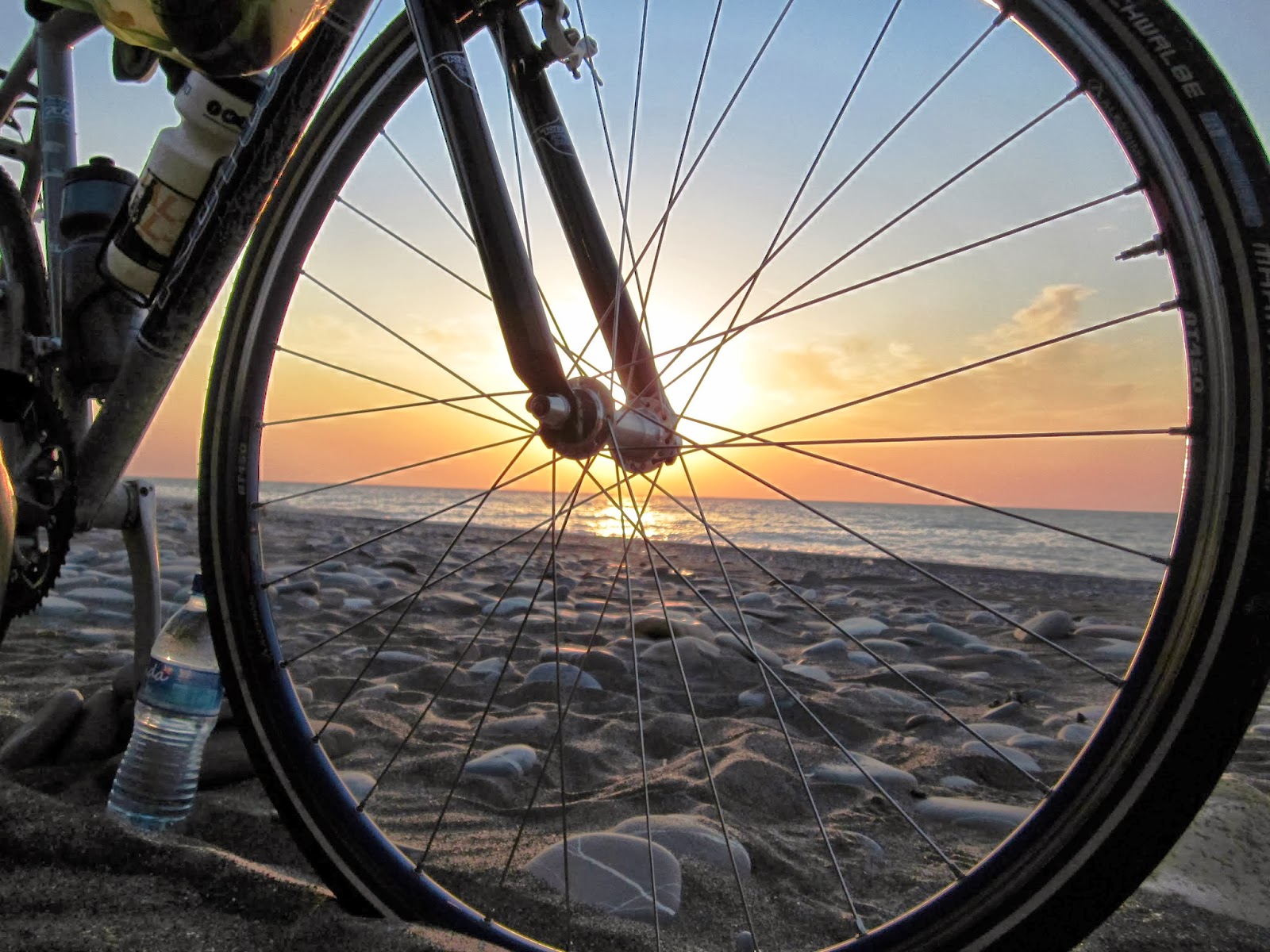 Good grıef, where do I even start?! So far the biking in Turkey ıs super easy, the cars gıve me a WIDE berth and a polite little honk to let me know they are comıng up behind me. This almost made me pee myself the first time it came from a big lorry, but now I find myself appreciating the not so subtle heads up. There isn't very much traffic on the main roads so the biking is relaxing, but this is not the way it started.

I flew into Istanbul then caught a connecting flight into Kayseri, a smaller city in the center of Turkey. A picture of the rock formations in Cappadocia area was the whole basis for me traveling to Turkey so I thought I would start there. I landed, and went to the baggage claim to wait for my bike. I waited, and waited, and waited some more. Two days later, looking like it had a run in with the jaws of life, my bicycle and most of my belongings decided to join me on my cycling trip.

While trying not to let the fact that the screws attaching the wheels to my bike were gone ruin my trip, I received my first taste of Turkish hospitality. My bike box was brought out to me on a flatbed cart with it's bowels exploding all the gear I needed for a month. I stared at it in open mouth shock. An airport official who was walking past looked at me, looked at the mess of bike parts then promptly sat me down and brought me hot tea and biscuits. After nibbling my cookies and slurping my tea my shock and dismay dissipated. I methodically put my bike together and miraculously the only thing missing was the quick lock that keeps the front wheel stuck on the bike. In a pinch a nut will work in it's place, and soon there were airport workers running to equipment closets and tool boxes to find the right size nut. When we found one that finally worked a collective cheer went up from the now sizable crowd. I was clapped on the back and herded out of the airport with an entourage of well wishers waving me off. I pedaled out the sliding door and into Turkey.

A right turn out of the airport seemed the least treacherous so right I went. Cars were whizzing past me at a furious pace and lane lines didn't exist. Ahead looked like a crazy jumble of madness. My balloon of headstrong self reliance quickly deflated into a withered little puddle of questioning my chosen method of travel. This wedge of doubt was bolstered by the fact that I had absolutely no idea of where I was going or even which direction I was headed. Suddenly ahead was a gigantic shiny, and welcoming bus terminal... and it was on the right. 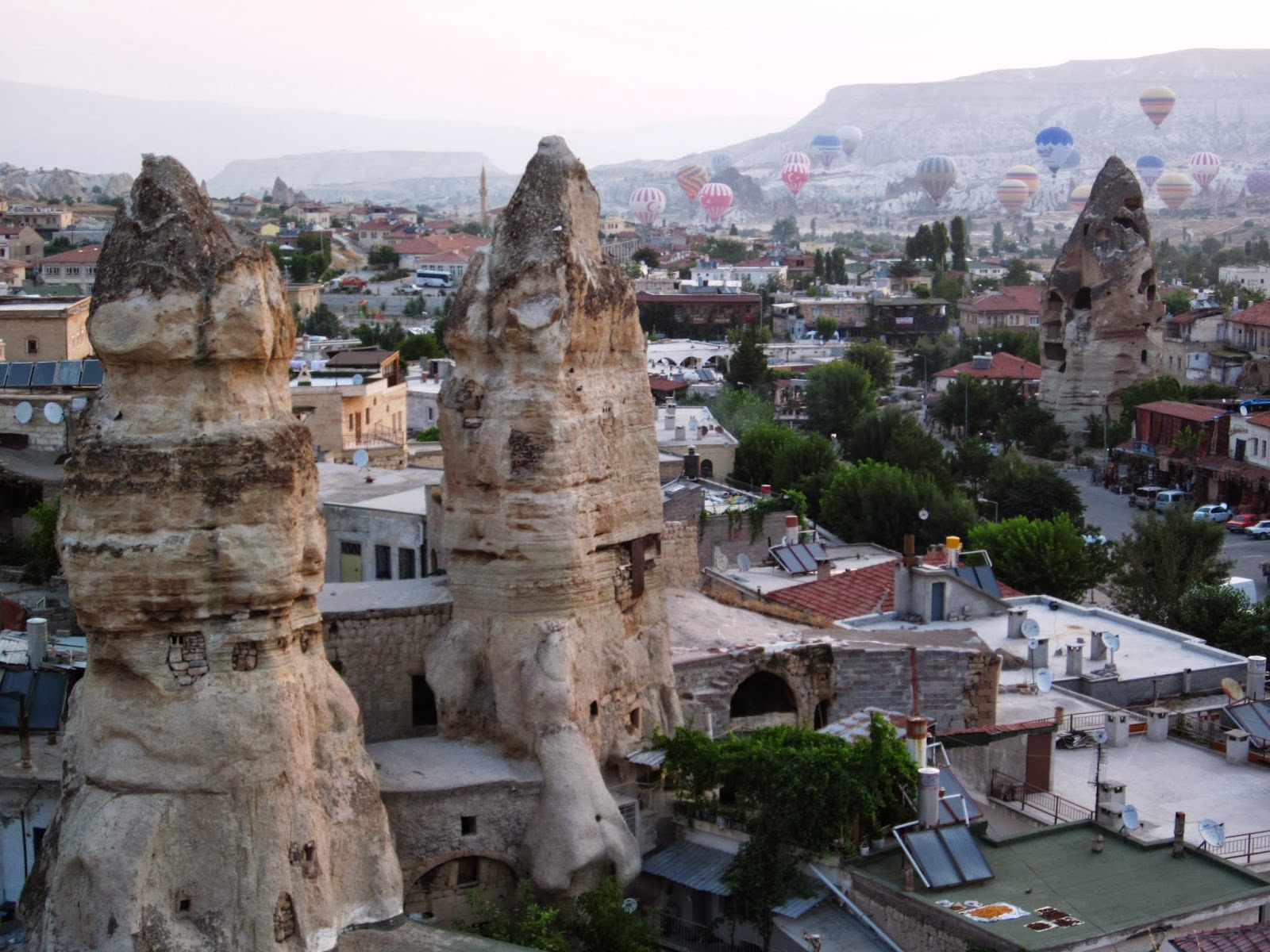 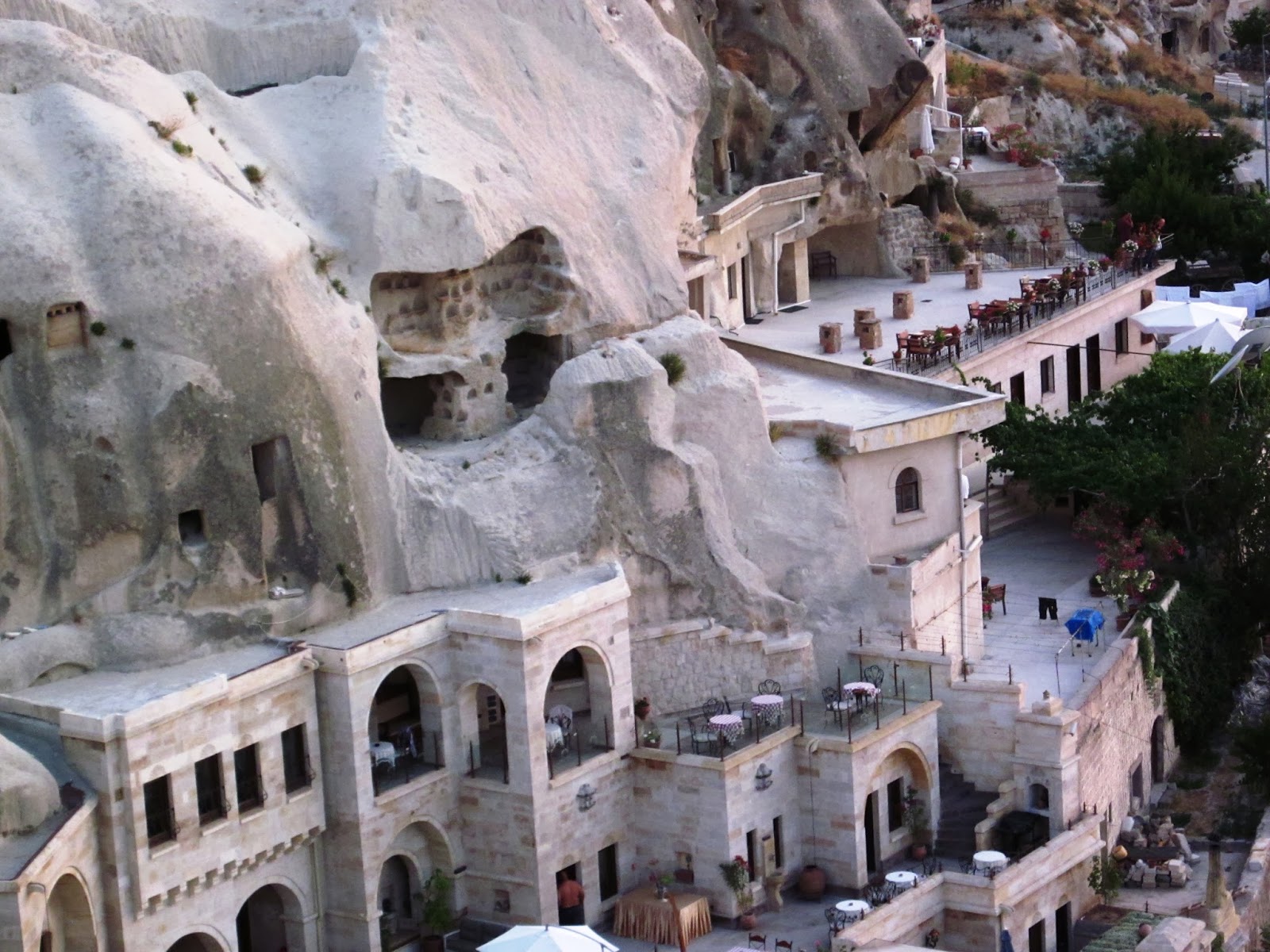 Taking the bus is far easier than biking, so in a matter of hours I found myself in Göreme. A little village nestled in a valley of questionable looking spires. This area was on the silk road trade route and throughout thousands of years monks, vıllagers, and nomads have hollowed out living quarters, churches, and pigeon rookeries (apparently you were a nobody if you did not deal in pigeon poop).

The village was made for exploring, and for tourists. Walking up narrow little alleyways carved out of solid rock, you could duck into doorways and look up to find yourself in an elaborately painted centuries old church that was being used to store grain. You could also be led by the hand by little old women who didn't speak a word of English and brought you into their homes to show off the potholders that they had been knitting all winter just for you. After a cup of tea and lots of wrinkly smiles, it only seemed right to buy four. 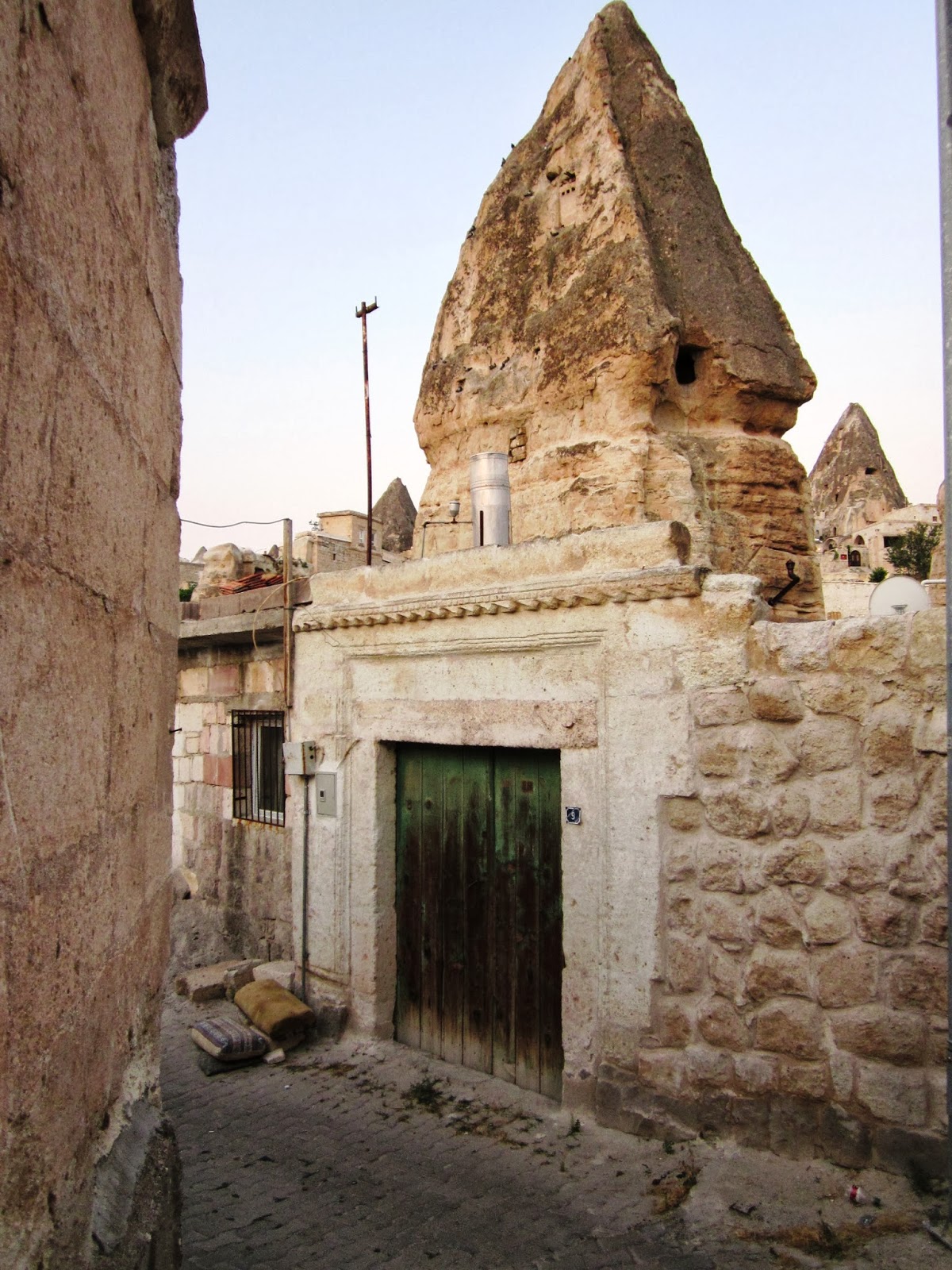 I spent a day hiking through some of the valleys surroundıng the village with my main objective being to find one valley in particular. There is a magical place fılled with hundreds of thin spires. Each with a pointy cap of harder stone which gives all the formations a decidedly inappropriate look-  the apptly named Love Valley.

Oh what a place. I walked around a corner on a nice, innocent sandy little path and my wise mature countenance dissolved in a 5th graders sense of humor. I lapsed into a helpless fit of giggles. To say that that the spires are phallic is an understatement. There they sit, each slightly ribbed by the weather and standing at very attentive attention. The thing I was not prepared for was the shear size of these massive pillars. Some were so big that they had stairwells carved into the shaft opening into a panoramic view of the whole valley.  I wondered if previous inhabitants had ever looked at their neighbor's spire and felt slightly inadequate. Walking around the base of an average pillar took a considerable amount of time. Leaning back against a spire, I was struck with the thought of how very ancient this place is, and how very lucky I was to be here. 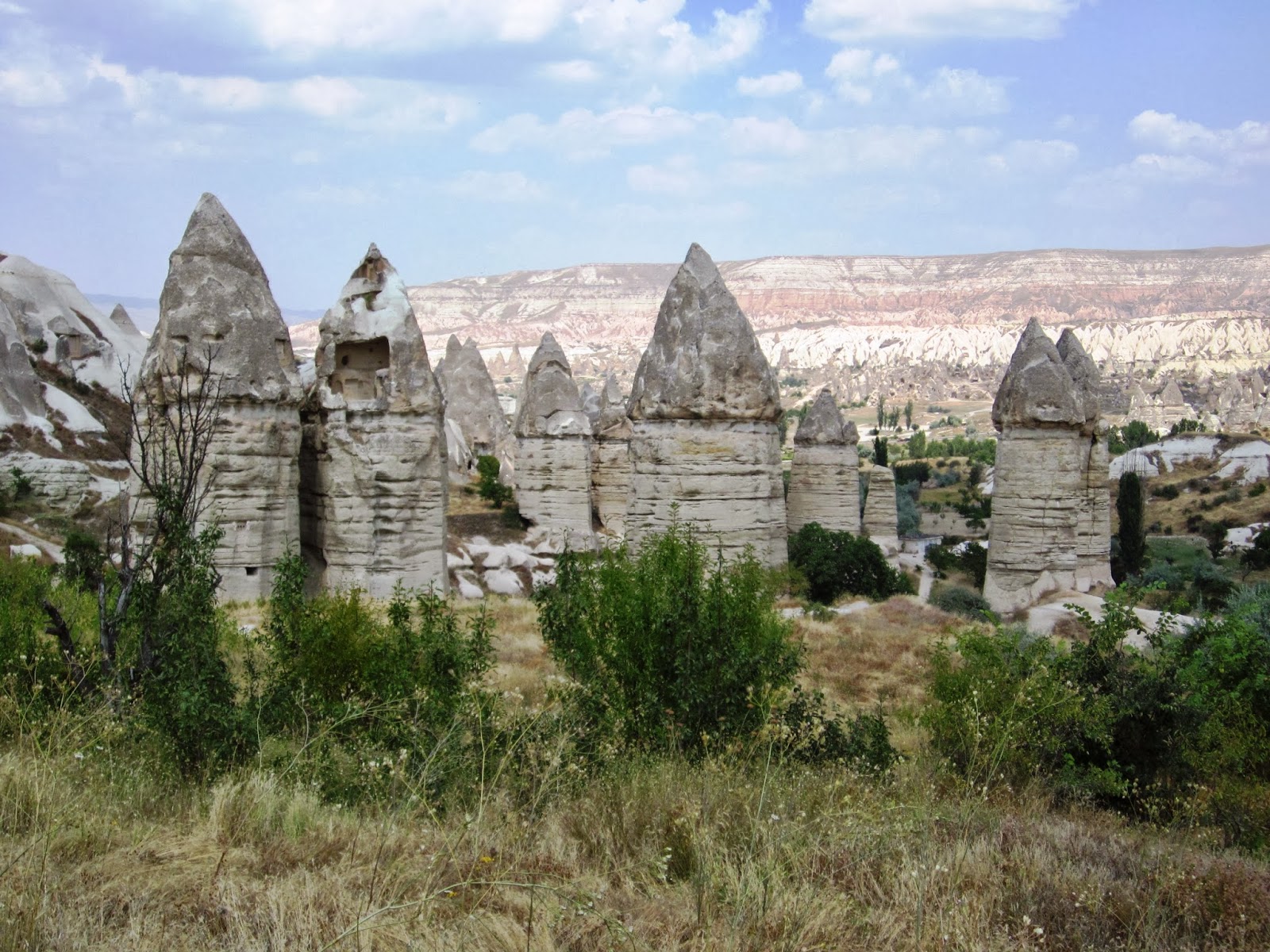 Goreme and the surrounding villages are the Disneyland of Turkey. The whole area was so stunningly surreal and different from any place I had ever been. My trip had finally started.