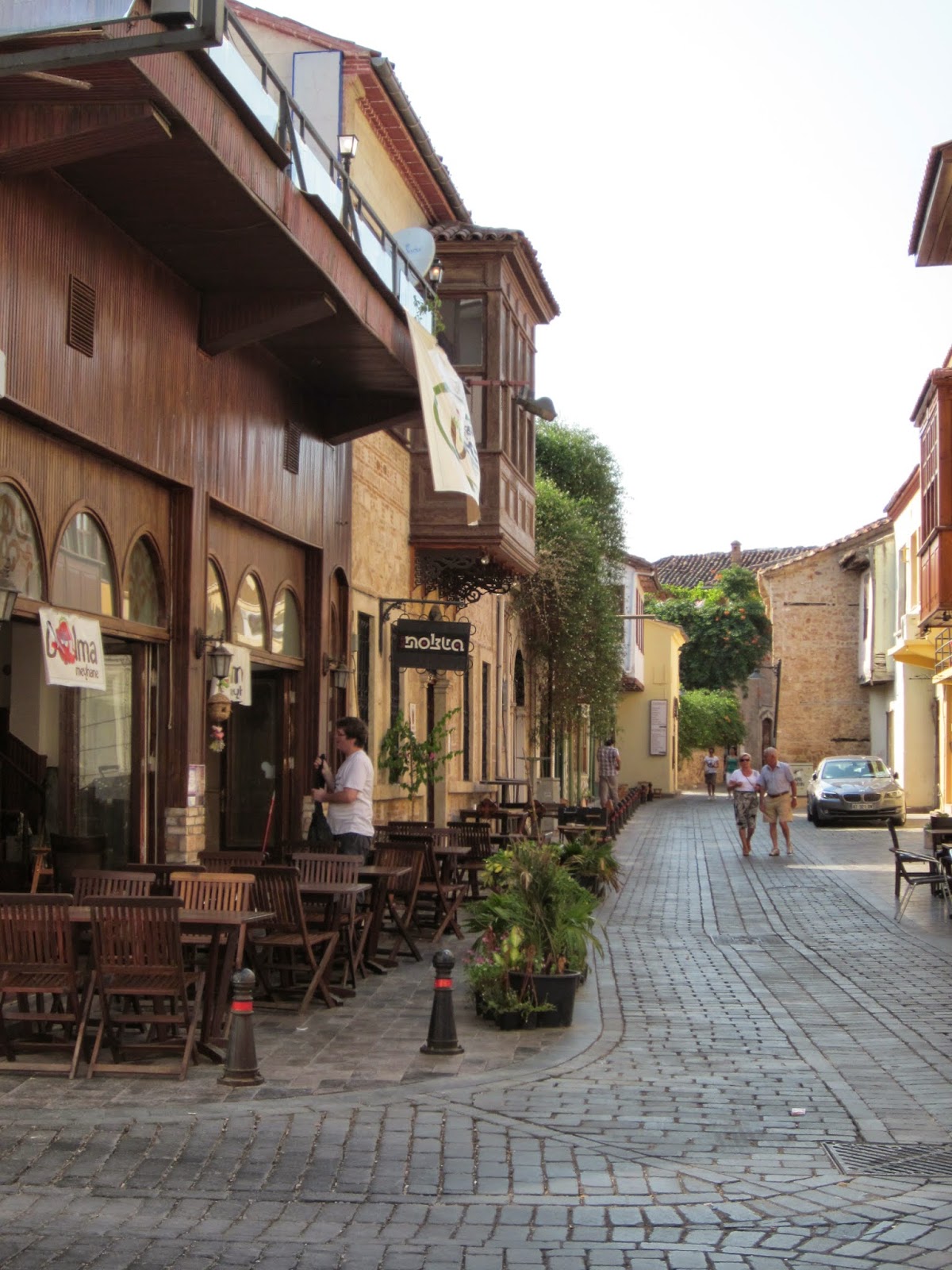 I found a beautiful hotel, Embassy Pansion for 40 TL per night, with a fenced in courtyard where I could dump my bike. I felt like I needed a little alone time away for the bicycle. I had a puffy rash on my legs and feet from cycling in the heat, and had managed to sunburn my back through my shirt the day before. I felt like I was wearing too much clothing and my head had been aching for two full days despite drinking gallons of juice and water. I needed a vacation.
Fortunately Antalya is the place.  The Mediterranean is blue green, the sunbathers are out in force, and every street corner sells fresh squeezed orange juice. Kayleci, the historic old town of Antalya has narrow winding streets of cobblestone and Ottoman style houses where the second floor overhangs the first. The town is full shops and little markets selling souvenirs, spices, and fresh fruit.  I went immediately to a clothing store and bought a tank top. For the first time in Turkey, I bared my shoulders, it felt fabulous. 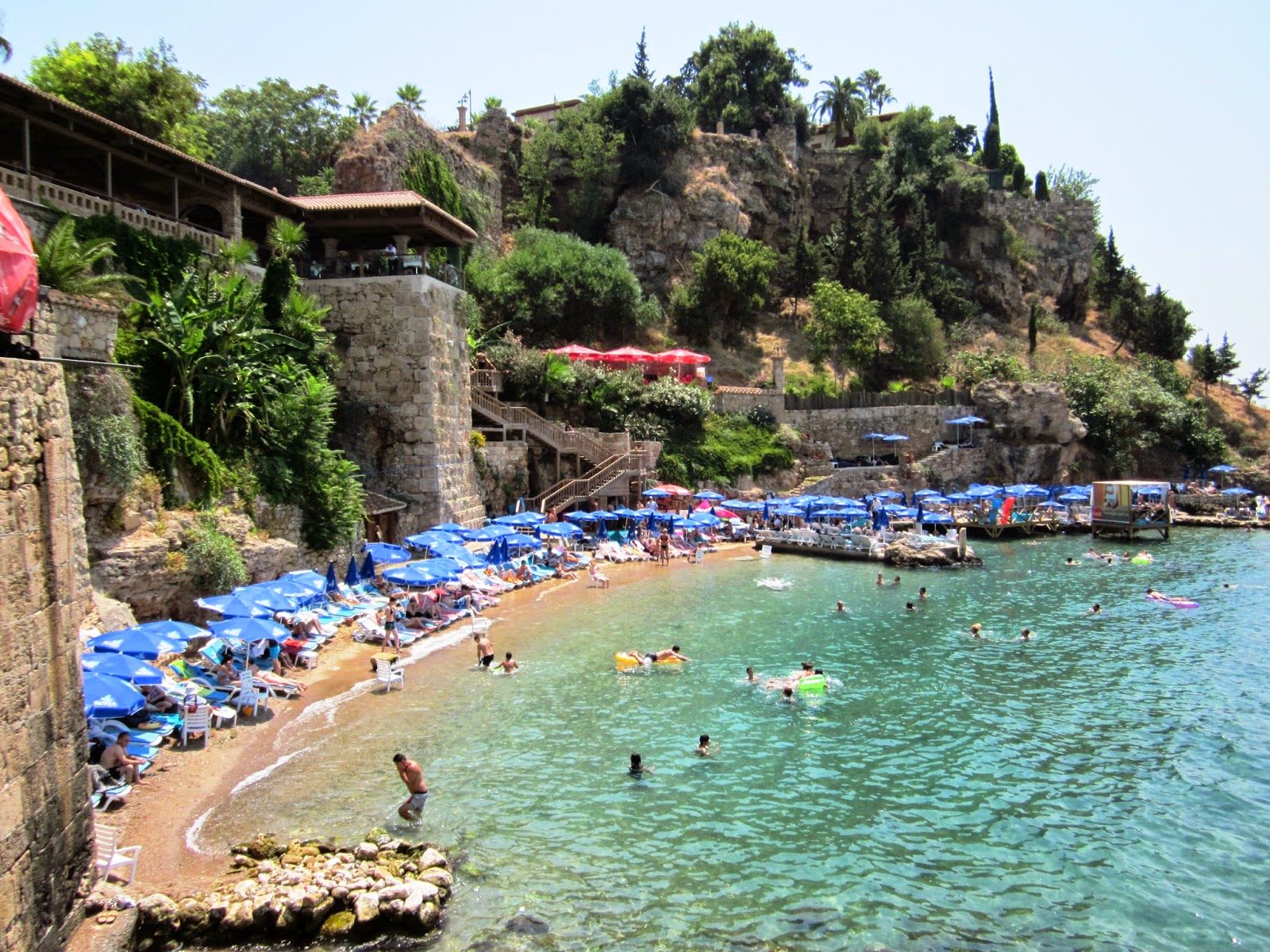 The heat was ever present so I would walk around for about an hour, find my hotel, take a freezing cold shower, and lay down with the air conditioning blasting until I dried off. This was working pretty well for me until the cleaning lady walked in on me laying buck naked on the bed. I decided that I needed to get out more.
There was a mosque nearby, and I had yet to go inside of one, so I peeled myself off the sheets and left. At the entrance to most mosques there is a bin of scarves that you can borrow. I had donned a shirt to cover my arms and with my borrowed headscarf, I left my shoes at the door and stepped inside. There was an instant hush when I walked in. The noises of the city are muffled by the plush carpets and thick marble walls. A few people were seated around the mosque praying. There was a special section for women off to the side, and I sat with my back against the smooth stone so could people watch without being noticed. 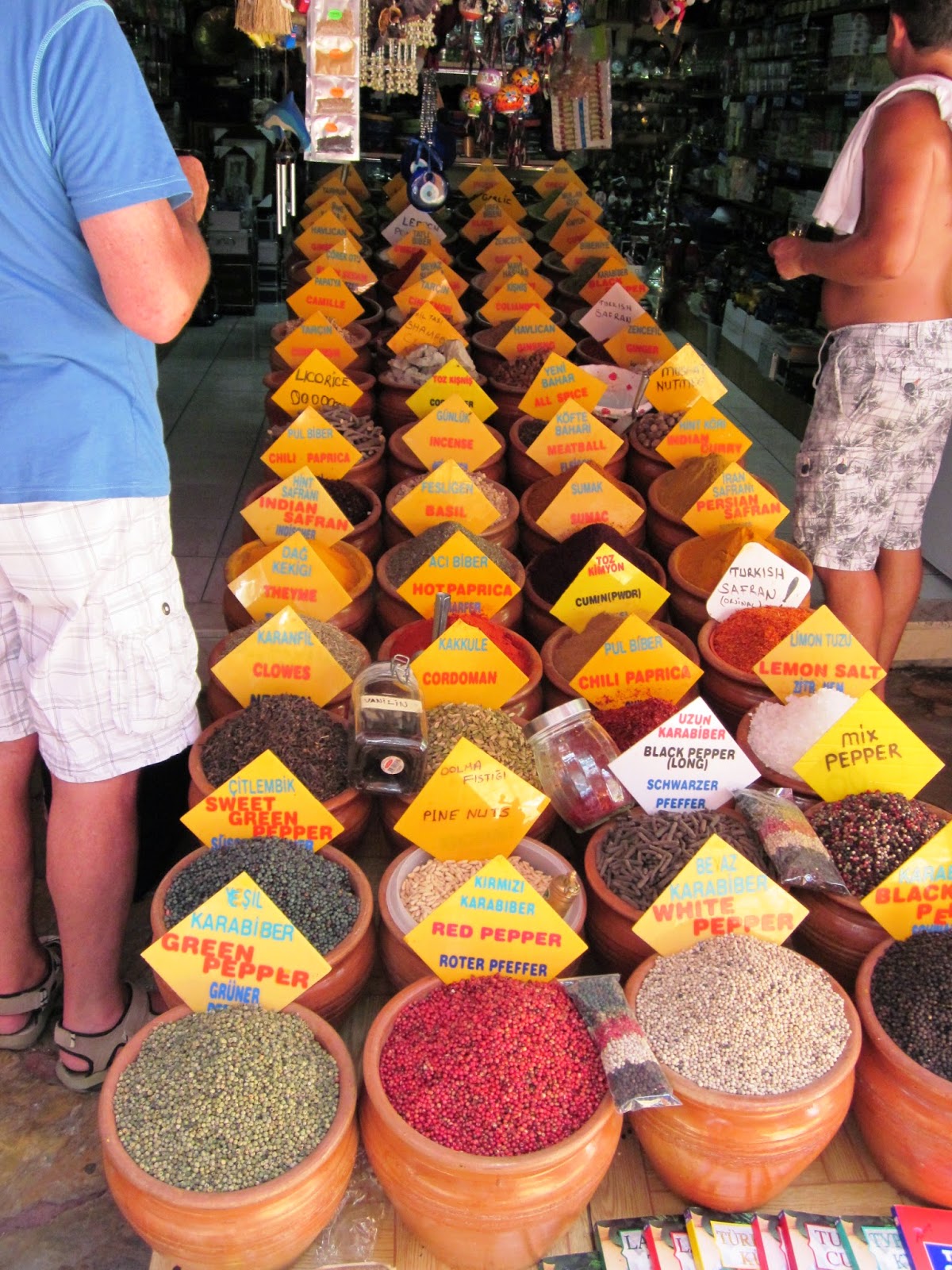 There is a different feeling when you step inside old religious buildings. Sounds become muted and the air feels heavier. The domed ceiling of the mosque let in an amazing amount of light and gave it a sense of airiness. There was pulpit in the center and a few rooms at the entrance. The mosque was very simple inside, the carpets rolled out wall to wall being the only decoration.
I realized after I had planned my trip that I would be traveling during the holy month of Ramadan. For the entire month, Muslins abstain from eating or drinking from sunrise to sunset. Just before sunset, people sit at restaurant tables with water glasses beading up from condensation waiting in front of them. As soon as the evening prayer sounds out from the mosque’s loudspeakers signaling sunset, everyone grabs their water glasses and drinks deeply. Each day, that must be the most delicious glass of water imaginable.

Sneaky Field Camping and onto Antayla

After leaving Sagalassos I was thinking I would just camp by the side of the road in the grass just above the town. This was a good plan. But when I found the perfect spot, the ground was full of goat heads, sharp rocks, and thorns. I had just bought my new tent, my really cool one person lightweight spiffy neato tent (the MSR Hubba) and the thought of ripping the bottom apart on thorns was too much for me. I convinced myself that I would find a better spot a little farther down, which of course I did, in someone’s yard. 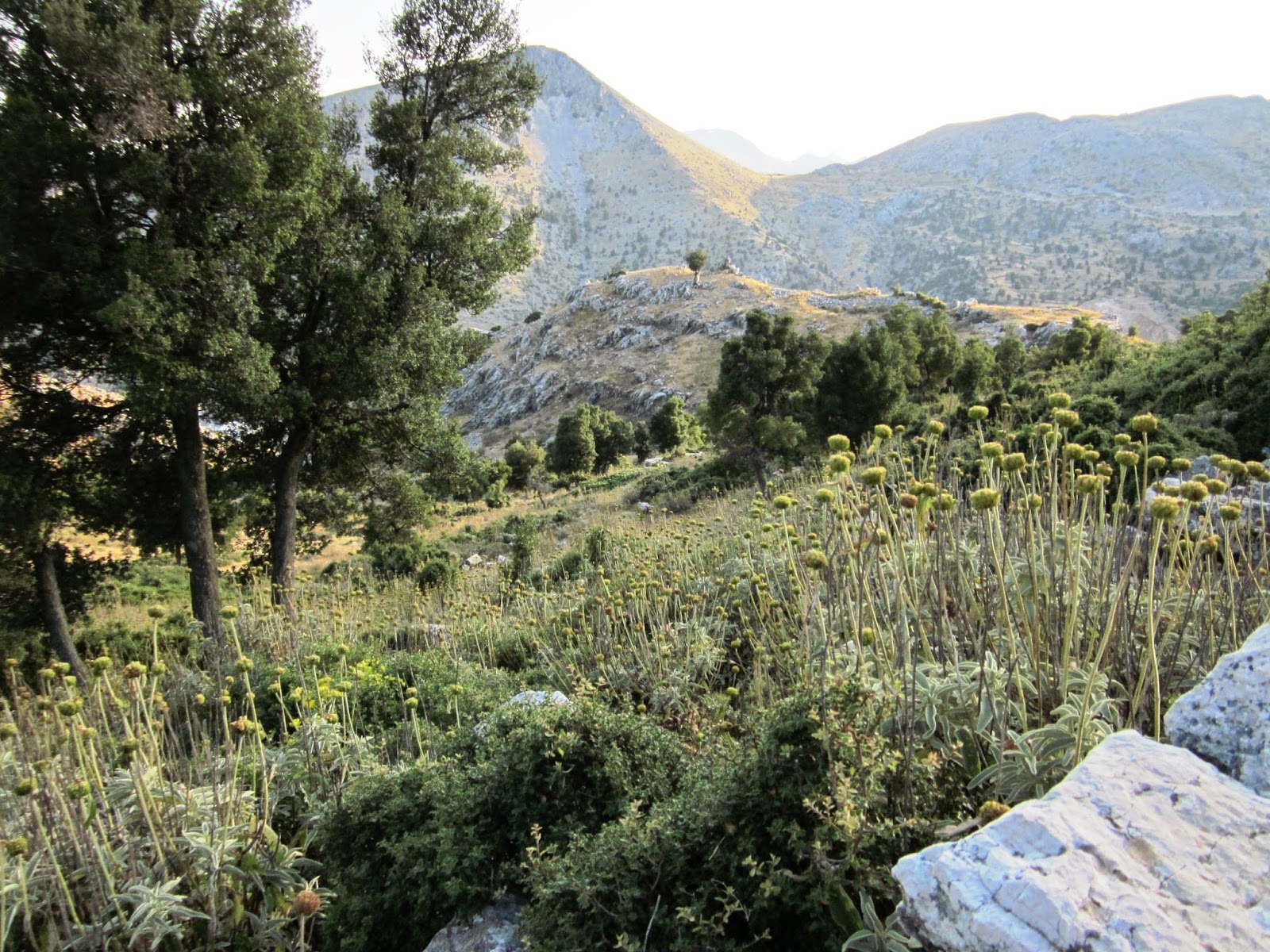 This would have been a much less stressful night if I had asked to spend the night in that person’s yard, but it was dusk, I felt like I had heat stroke, and the thought of dealing with the language barrier right then and there was just too much for me. So quietly and slowly I pushed my bike down into a lush, grassy orchard. I could barely see a building through the trees and I planned to be out early in the morning.
That night I moved in slow motion, I was silence itself. It took me half an hour to blow up my sleeping pad but finally with camp set up, I crawled into my tent and passed out… until I heard footsteps. With dread stealing over me in waves of hot prickles, I waited for the angry voice. This happened all night long. There were cats that gave me heart attacks, flying night monsters that made my heart pound, and actually snakes that slithered against the walls of my tent.
When the sky started to lighten, I gave up on sleep and packed up. Riding the last mile into Aglasus I arrived just as a dolmus pulled up, heading to Antalya. The Dolmus is a van where, like magic, amazing amounts of people all fit into an exceedingly small space. I pointed to myself and my bike, then to the dolmus. The driver nodded and I nearly threw my arms around him with joy, until I looked inside. 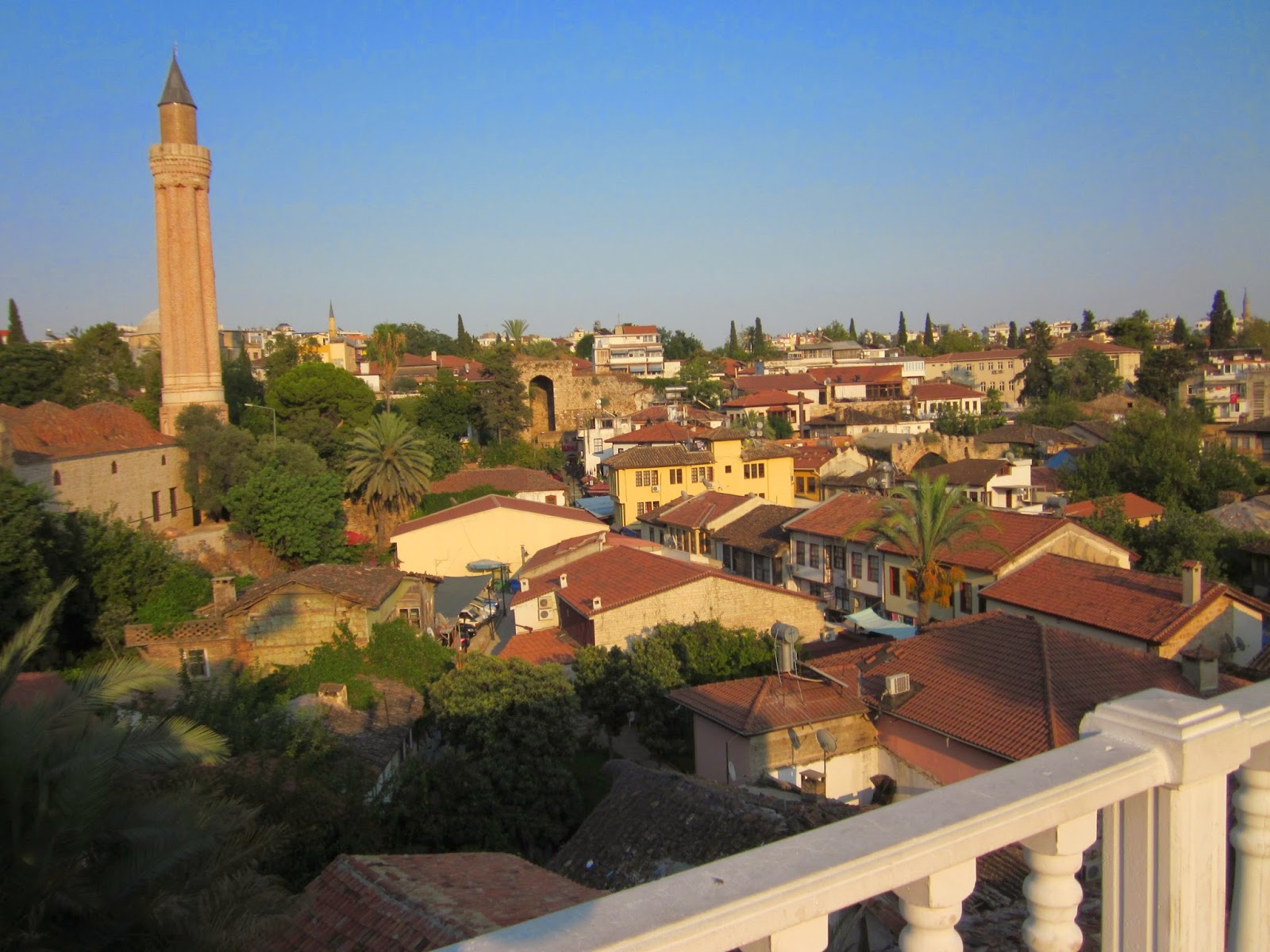 If the Dolmus is a magic capacity machine, then the driver is most assuredly the magician. In the blink of an eye, the wheels were taken off my bike, the panniers were thrown somewhere, I was pushed into the lap of very boney woman, and my dirty, greasy bike frame was pushed into mine. I have never been happier to ride 120km in a non-air conditioned car. The road was steep, dusty, and under construction; there was not an inch of shade or shoulder on the road.
With temperatures over 100°, I was thrilled to pay the 10 lira for the ride, and despite my awkward and inconvenient baggage, not one passenger gave me a dirty look. I was pretty sure they all though I was just plain crazy. And truthfully, I had to agree. Perhaps a bit more research on bike routes in Turkey would have been worthwhile. So far, this is not the route I would suggest.

﻿
5 August 2011
When there is no plan, each day is full of opportunities. I decided that I would head south towards the Mediterranean ﻿coast. On the way there is an Archeological Site called Sagalassos. The ride was hot, dusty dirt roads full of construction traffic, and steep winding downhill. By the time I got into the valley below the ruins I was delirious with heat, but all signs pointed up, up, up. 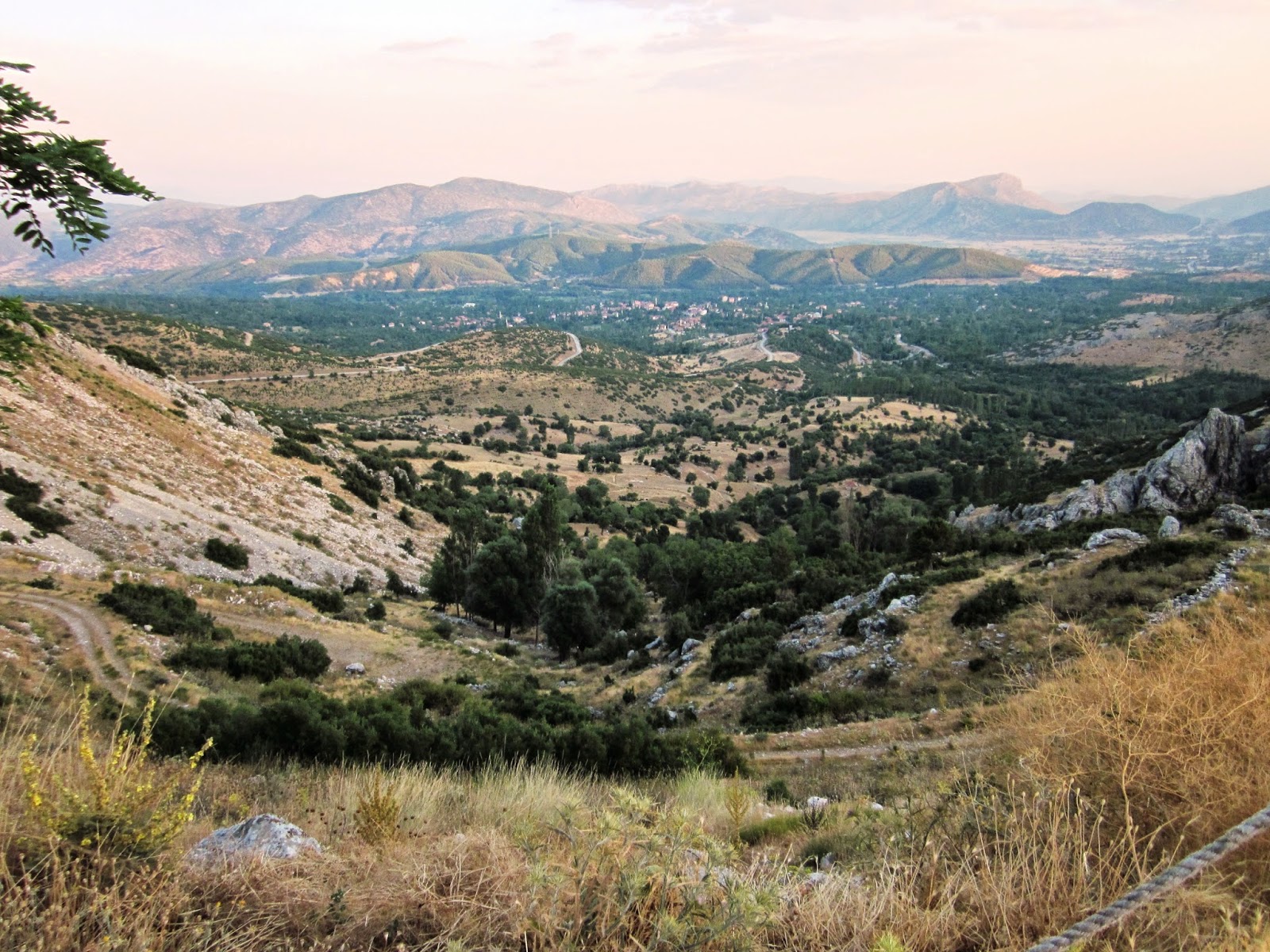 After a quick lukewarm water break, I oozed myself back onto my bike and started the long uphill grind. The road climbed above the valley floor, climbed up into the surrounding hills, climbed to the top of the ridges, and still no sign of the ruins. By now it was the hottest part of the day without  a speck of shade on the climb. I was mashing my pedals down to gain a little bit of up. I was standing, sweating, grunting out loud, and beetles were going up the road faster than I was. I gave in, I pushed my bike, and pushed, and pushed. Hours dribbled by and finally 5,500 feet up, I saw the gate. Two men were sleeping as I limped into the shaded entrance area, huffing and blowing hard as sweat streamed down my face and crusty salt flaked off my skin. They looked at me, and without asking brought me a drink... of scalding hot tea.
The site had 30 minutes before it closed for the night, but the men told me that I could wander around as long as I wanted. The sun was easing off, and there wasn't a single person around other than the two men back at the gate. With the ride over and done with (and heat blisters rising up on my thighs) I took my water bottle and sat overlooking the main marble road within the ruins. A quietness settled me as I took in the view. 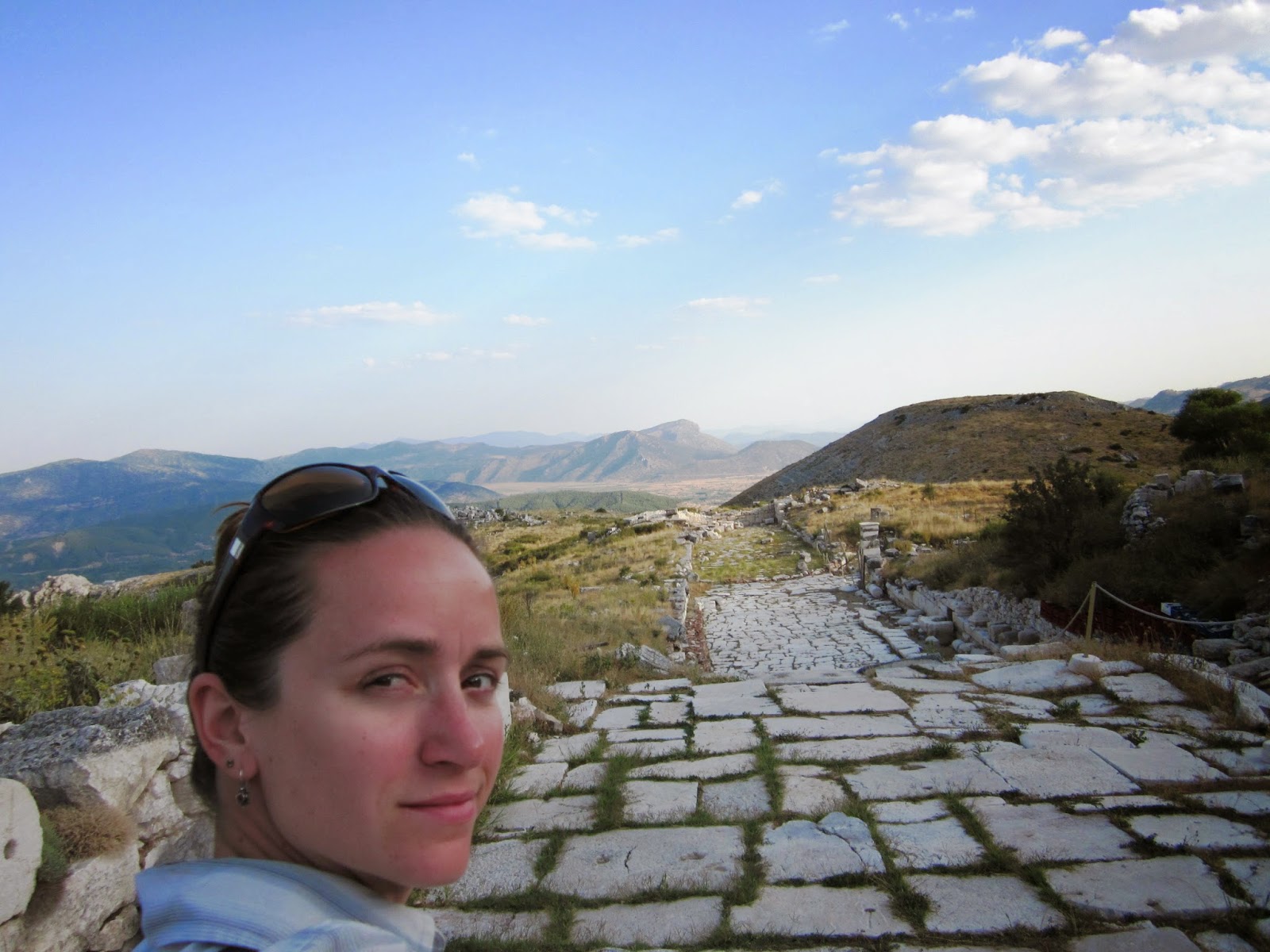 Looking around at the thousands of intricately hand carved marble blocks, I was struck by the amazing amount of time and work it took to build this city. People had been living in the area since 8000 BC but to hear some of the big names of Roman History and know that those people had walked these same paths was blowing my mind.

Alexander the Great captured the city in 333BC and roman style development continued. The main attraction of the ruins is the fountain in the square. Giant marbled pillars topped with scroll worked arches frame statues of gods and goddesses. Each of the statues stand taller than I am and water pours out of a fountain into a pool that they watch over. It was jaw dropping beautiful. 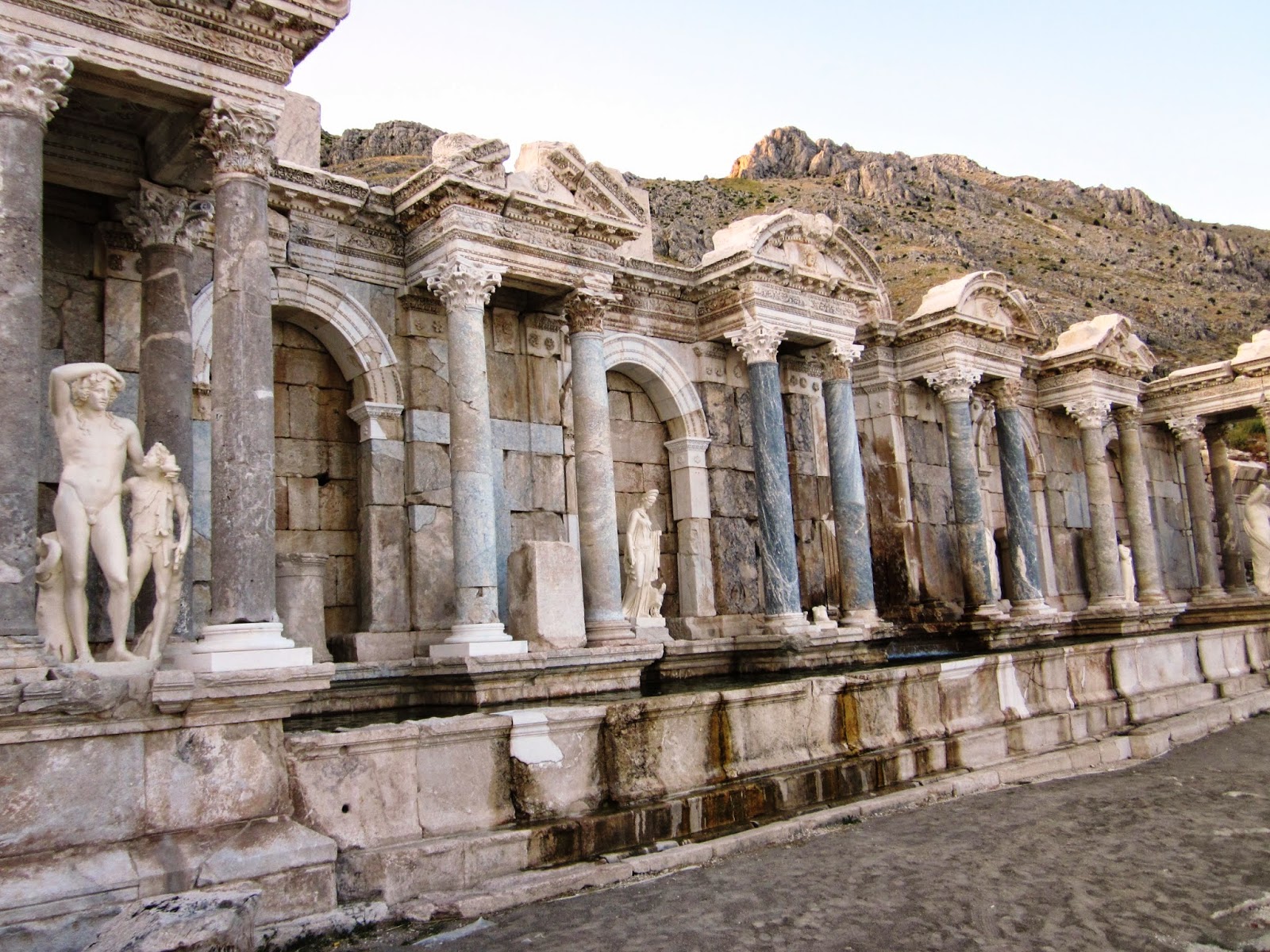 I walked around the site for hours and I had it all to myself. There was a heaviness to the area that made me feel like an ant in size and a speck in time. I felt so lucky to be there and to see it at my own pace. The roman baths built around 1 AD, during the rule of Marcus Aurelius, are some of the oldest in the Anatolia area. As I walked along the outskirts of the site I stubbed my toe on the corner of a rock and stumbled forward. Looking back, my "rock" was carved heavily on one side with roman lettering and a patterned border. Every stone seemed to have significance here. I felt like I was slipping into a gladiator movie. 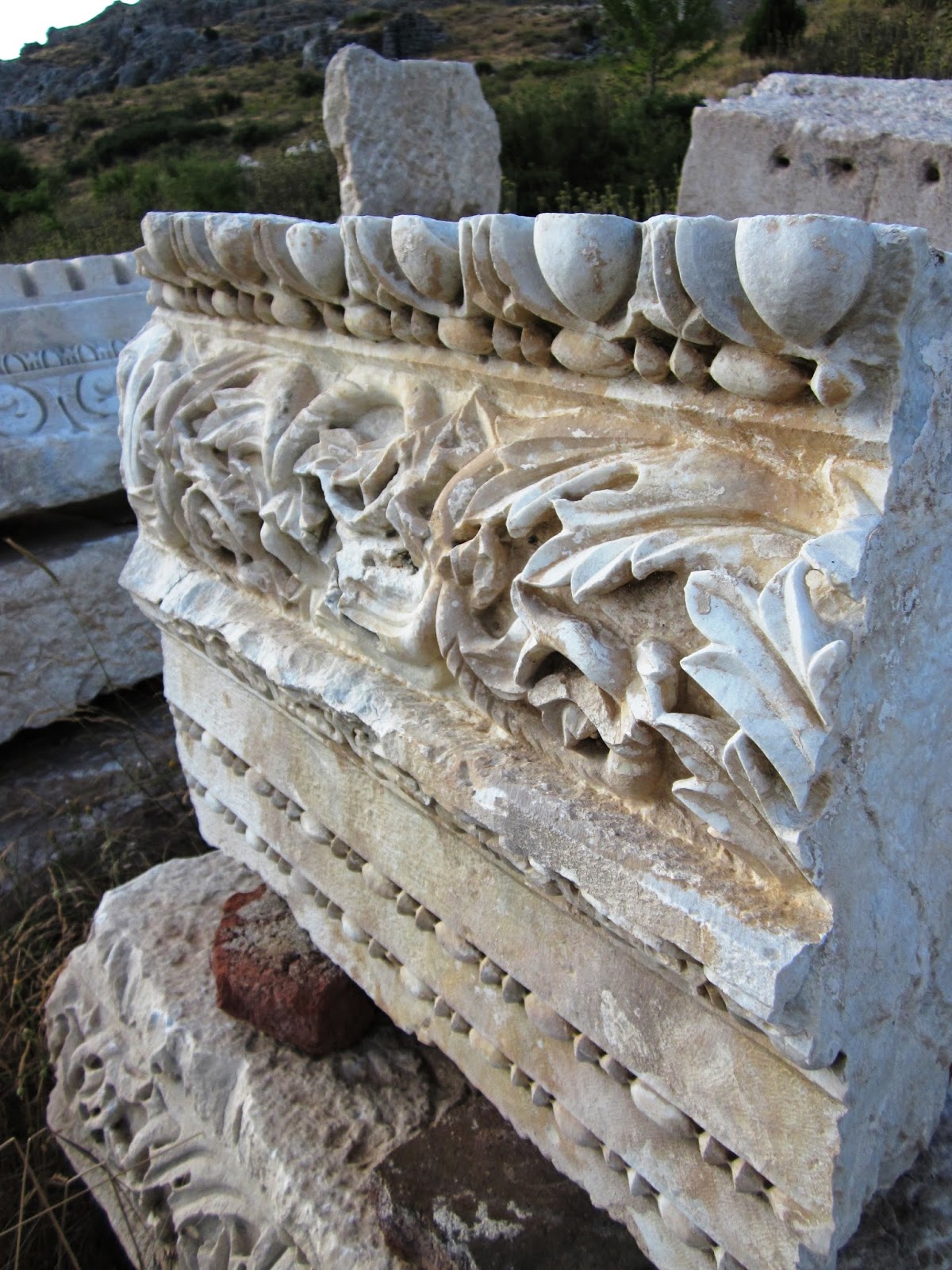 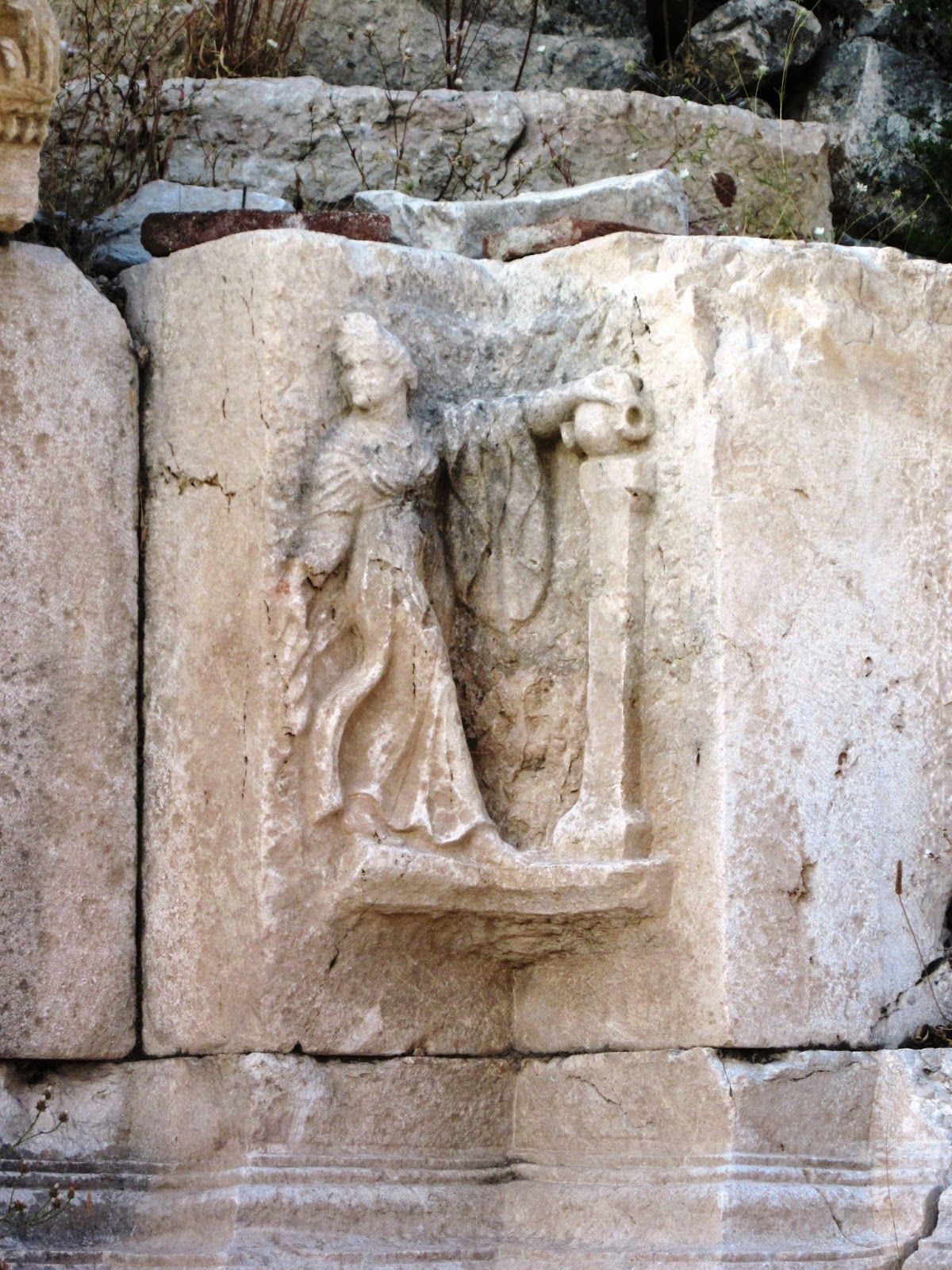 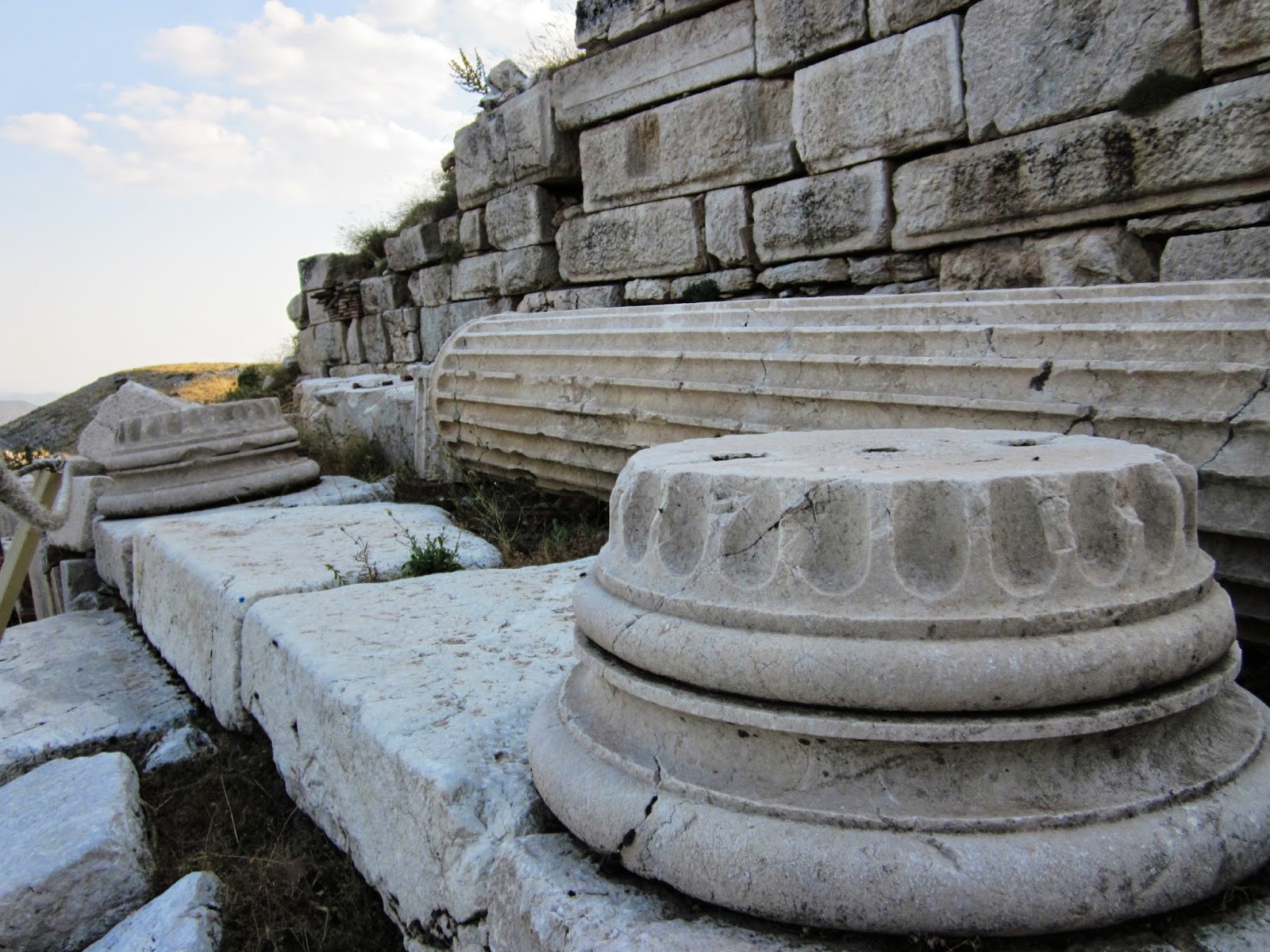 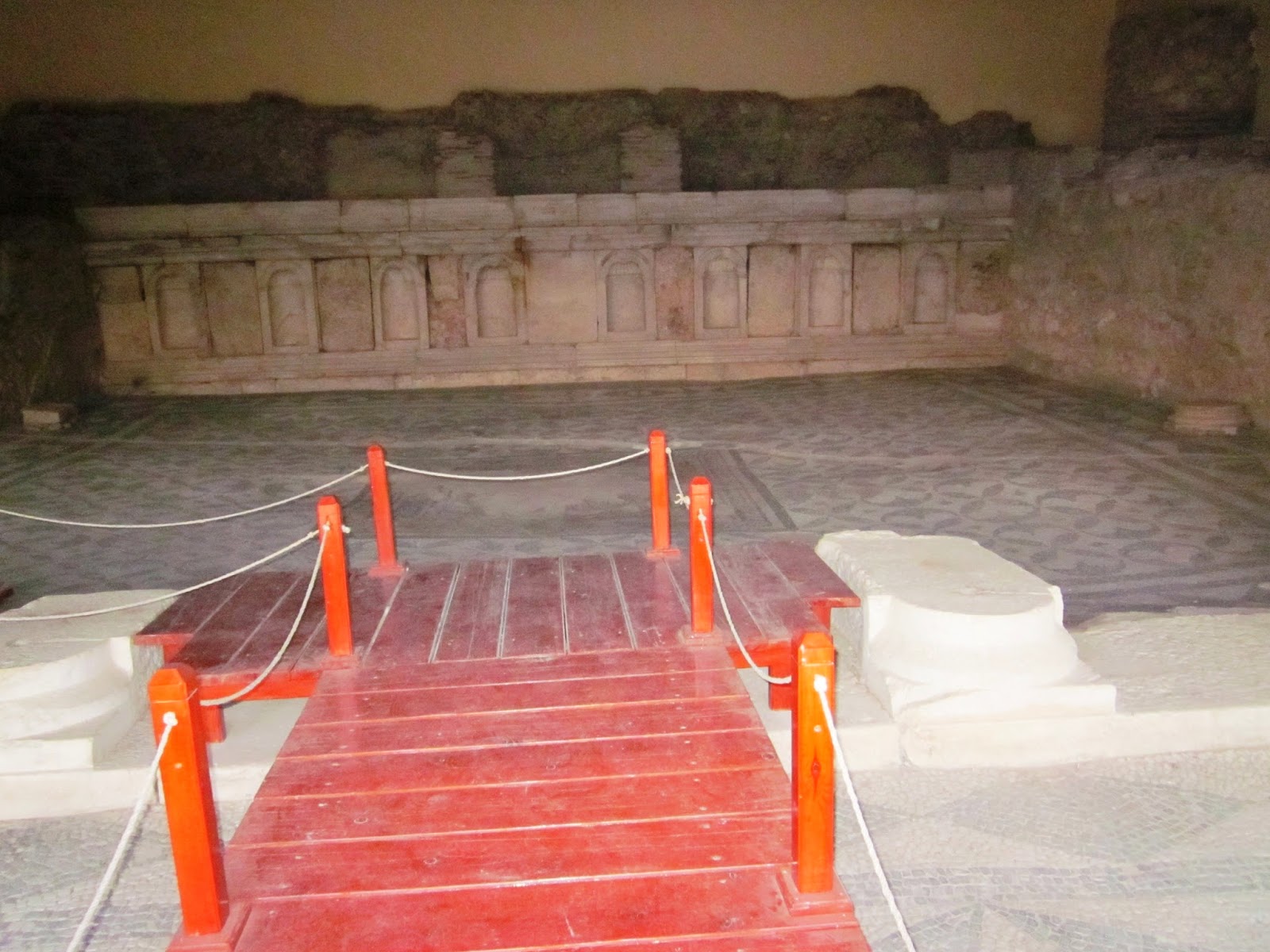 The city was devastated by earthquakes multiple times, the last was so severe that the inhabitants were forced to move away from the ruined city and down into the valley. Because of the difficulty in getting to the site, it has mostly been protected from looters. The earthquakes have also served to protect the site. The library once held thousands of scrolls in alcoves surrounding a beautifully mosaic tile floor. The floor, almost fully intact was saved when the roof of the building collapsed suddenly during one of the quakes
I made my way slowly back to the entrance. The two attendants wanted to know if it was worth the ride up the mountain. I told them that I would have made the climb ten times over again to see this place. After one last cup of scalding tea I jumped on my bike with a spring in my step. The downhill back to the valley was crazy fast. Zipping along I hooted and whooped all the way down. 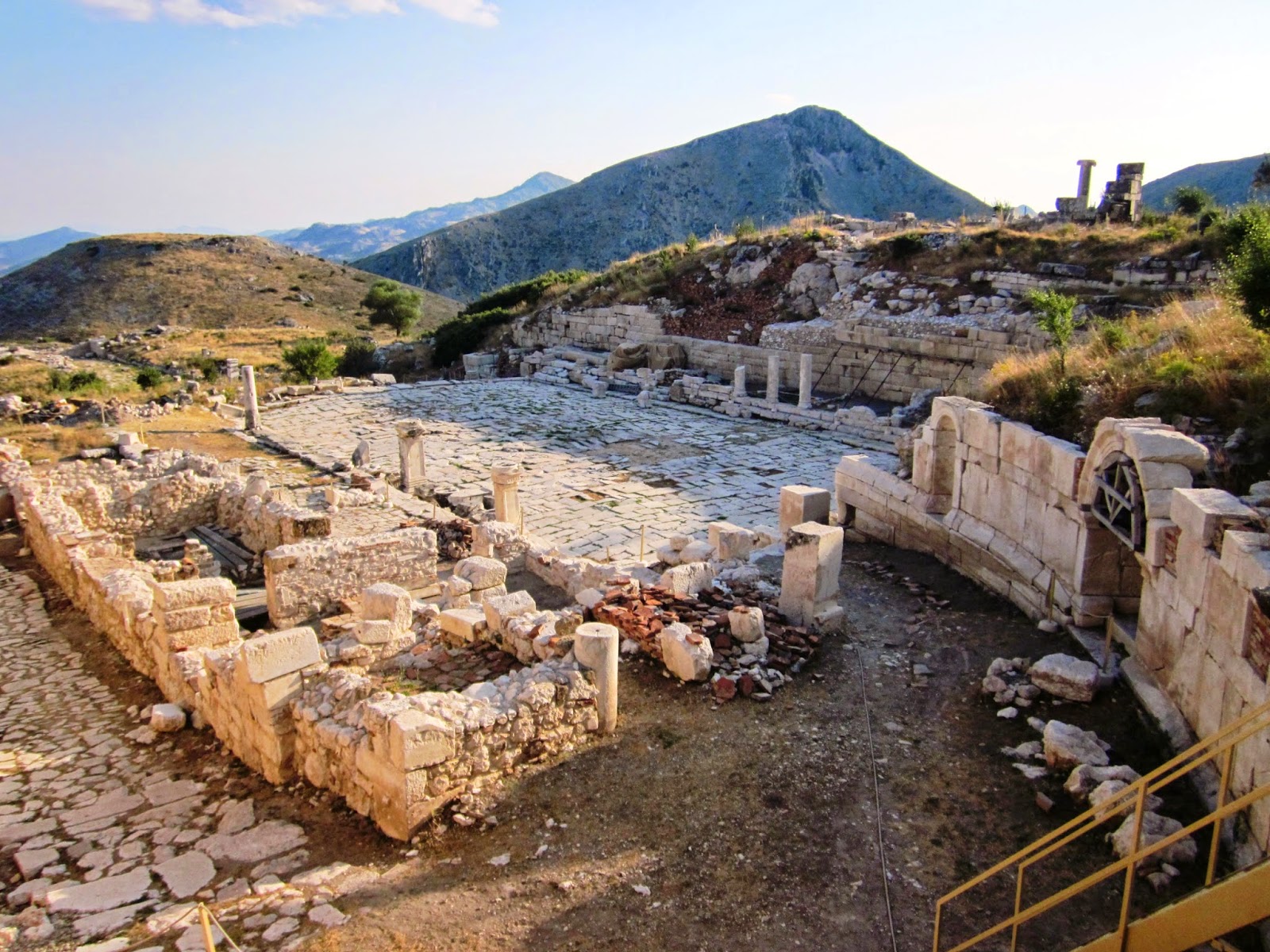