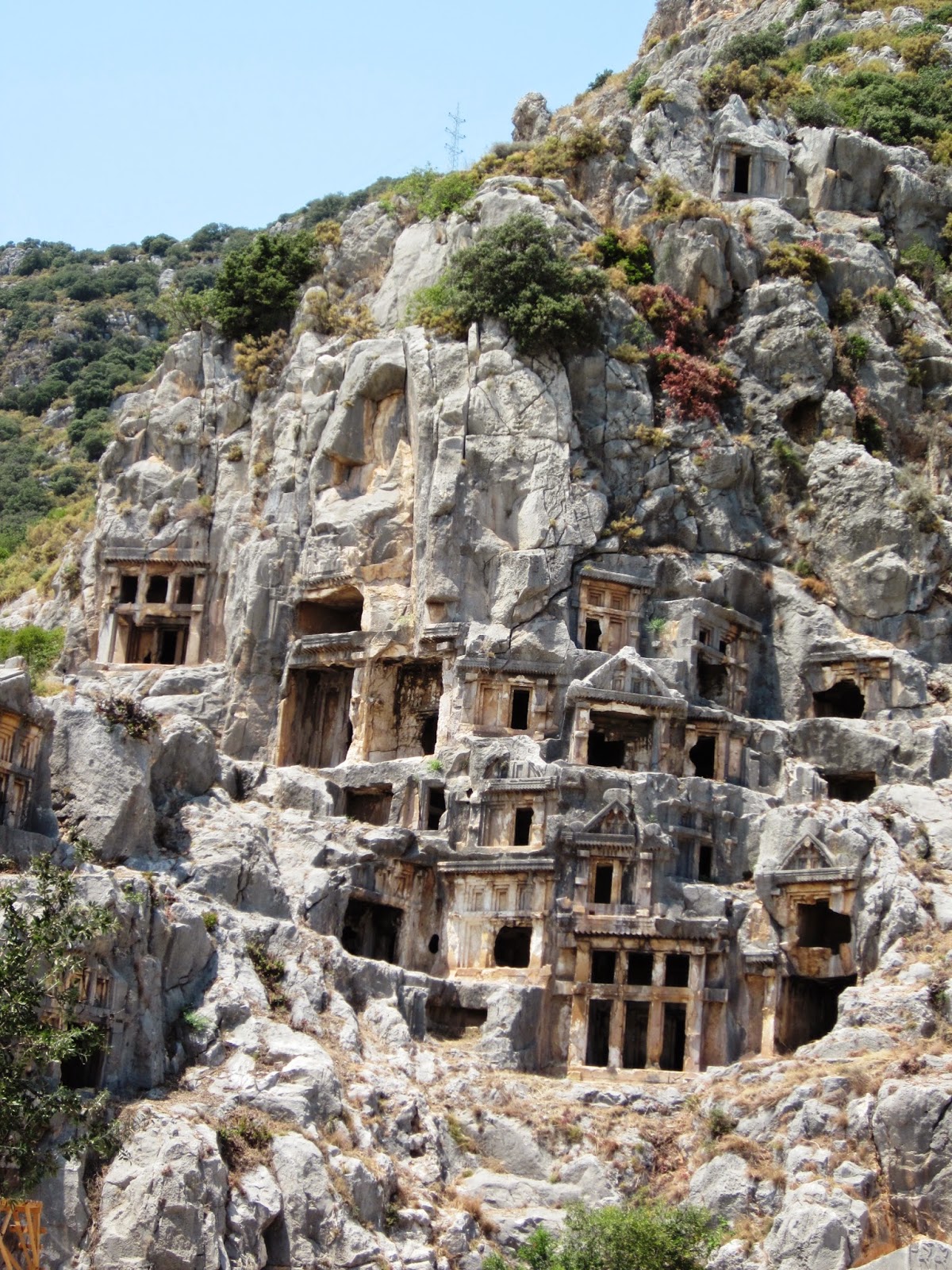 After my standard breakfast of tomatoes, cheese, olives, and bread (most always included in your hotel room) I decided to catch the bus to Myra. I took one last cold shower and forced myself into the blazing sun for the short but oh so long hot ride to the bus station. So far I had ridden my bike very little and my bike had ridden the bus very much. I saw no reason to change this, as I was on vacation after all.
The Myra archaeological site is a sheer cliff face riddled with ancient tombs and carvings. I thought that the tombs were the only thing to see there, but just to the right there was a beautiful amphitheater with seating for thousands, and thousands came to see it. Bus load after bus load of tourists poured into the site as the afternoon wore on. Even full of people, Myra’s tombs and stone work was massively impressive. Every nook and cranny was full of giant blocks carved over ever inch with theater masks and scrollwork. 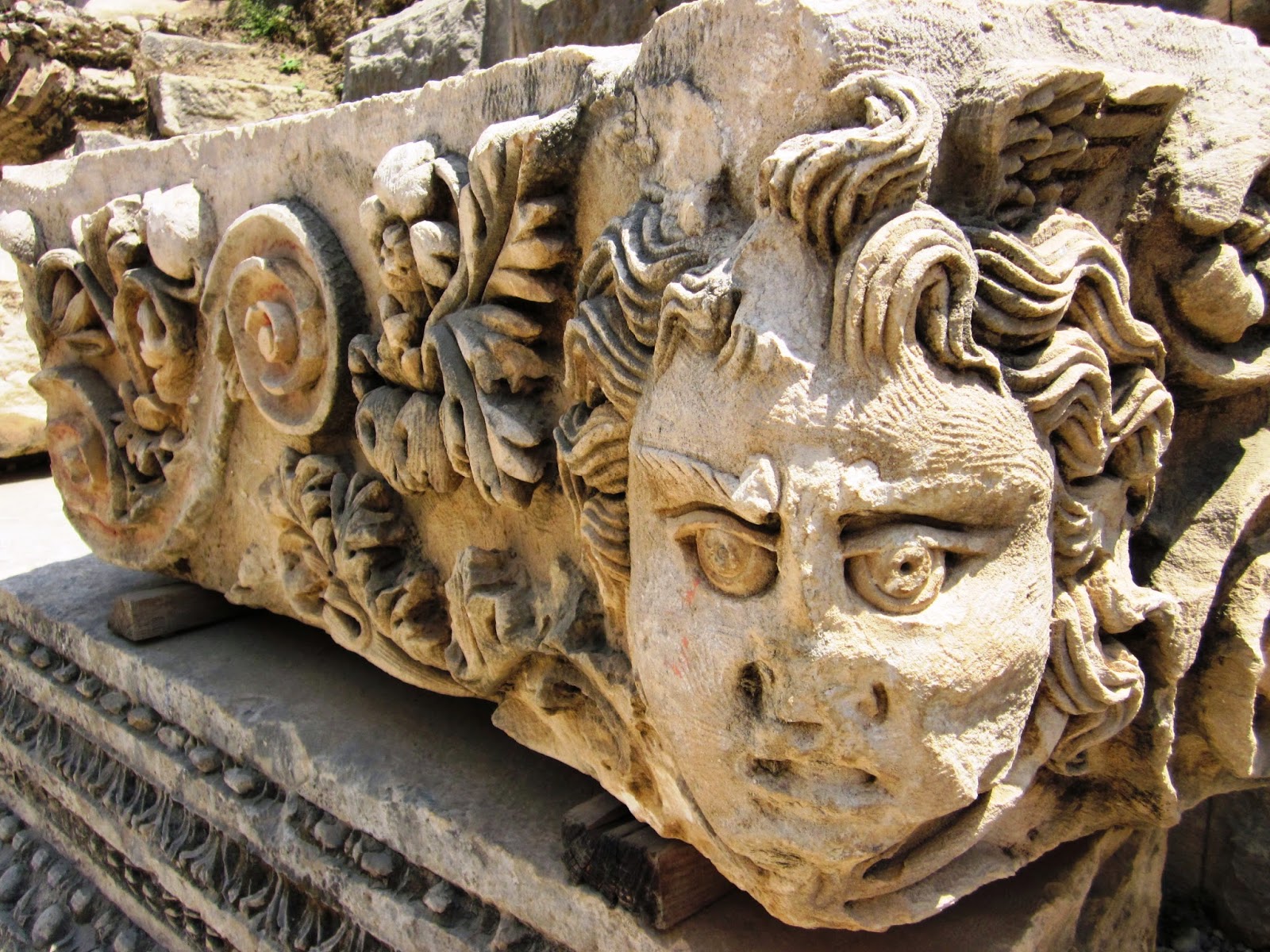 I wandered for hours, forgetting the heat as I explored nooks and crannies full of giant blocks with every inch carved into theater masks and intricate scrollwork. Nothing was off limits, you could crawl around the steep hillsides to your hearts content. The tombs required a sandy scramble to get up to them, but once inside the coolness flowed through the rocks and the view over the site looked down onto an anthill of tourists. 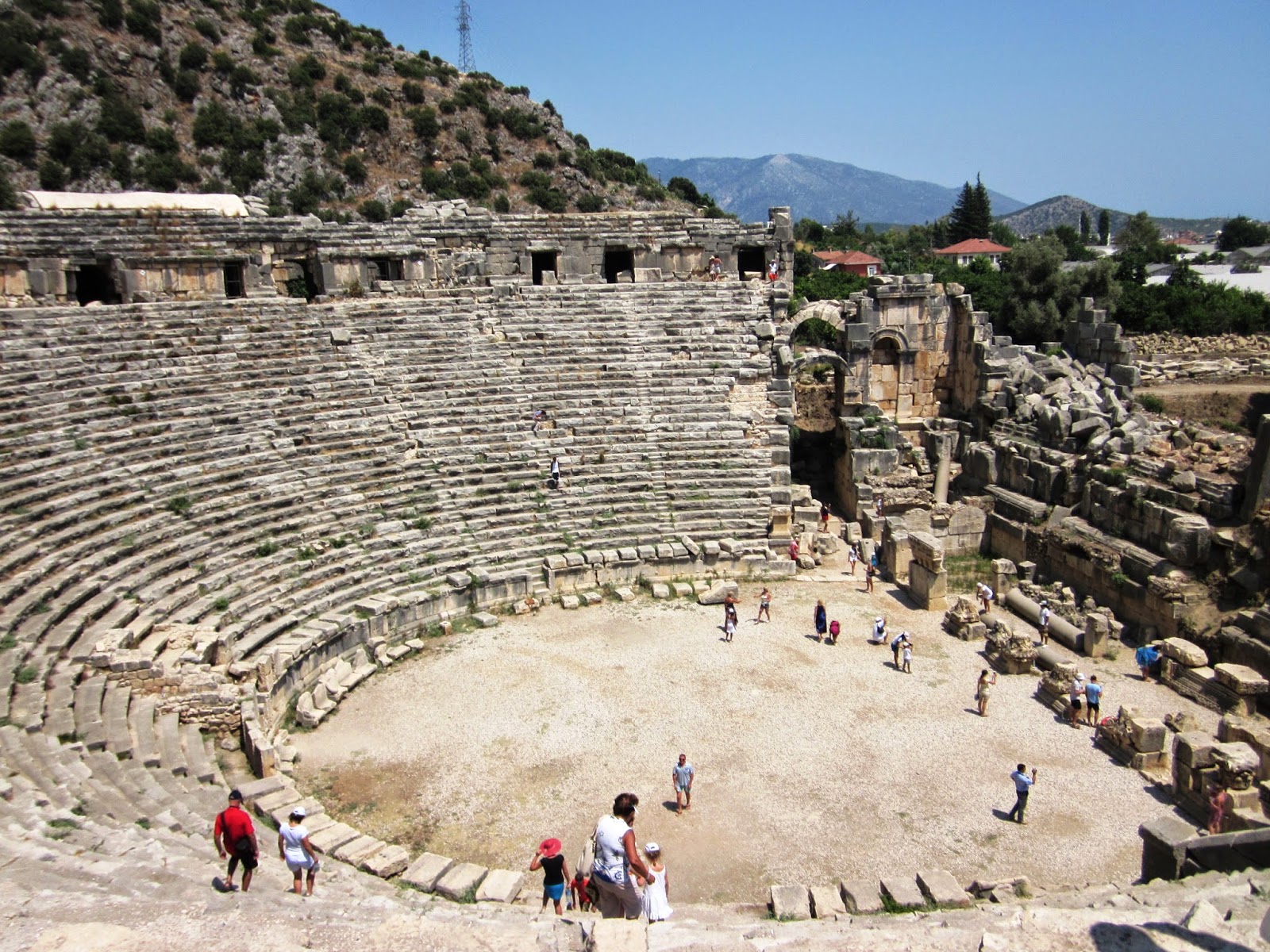 I made my way down to a restaurant and drank juice until I could hardly move. Cats and chickens moved around the table legs without anyone even taking notice. I had the brief thought that if I waited long enough things would cool down, but I had to make the next town before nightfall.
In town there is a Christian cathedral to St Nicholas, the patron saint of western Christmas. At the church there are statues of St Nick and just outside the main doors, a baptismal font that could fit a 300 pound man. I was starting to get a glimpse of just how much ancient history played a part in Turkey's Christian history. Inside, the cathedral was cool, so I liked it and was happy that I had stopped, but much of it was in ruins. More interesting were the souvenirs and knick knacks that were being sold outside. There were stalls filled with Christmas decorations from little glass ornaments with St Nick's face to tinsel covered holly branches. With 100 degree weather and desert all around I felt like I had stepped into a Christmas twilight zone. I reluctantly pulled myself away from glittered evergreen trees , climbed onto my bike, and rode towards Kas. 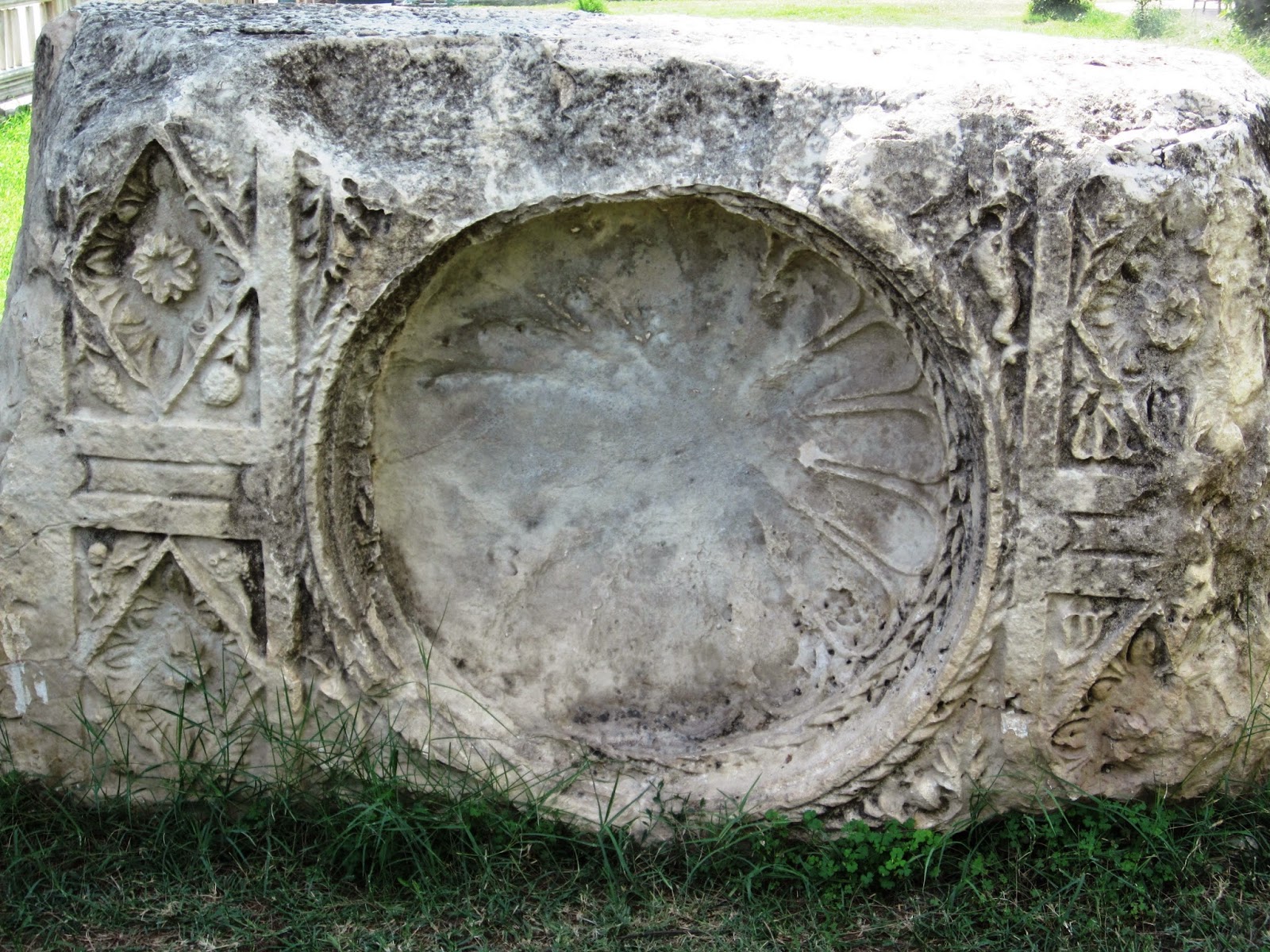 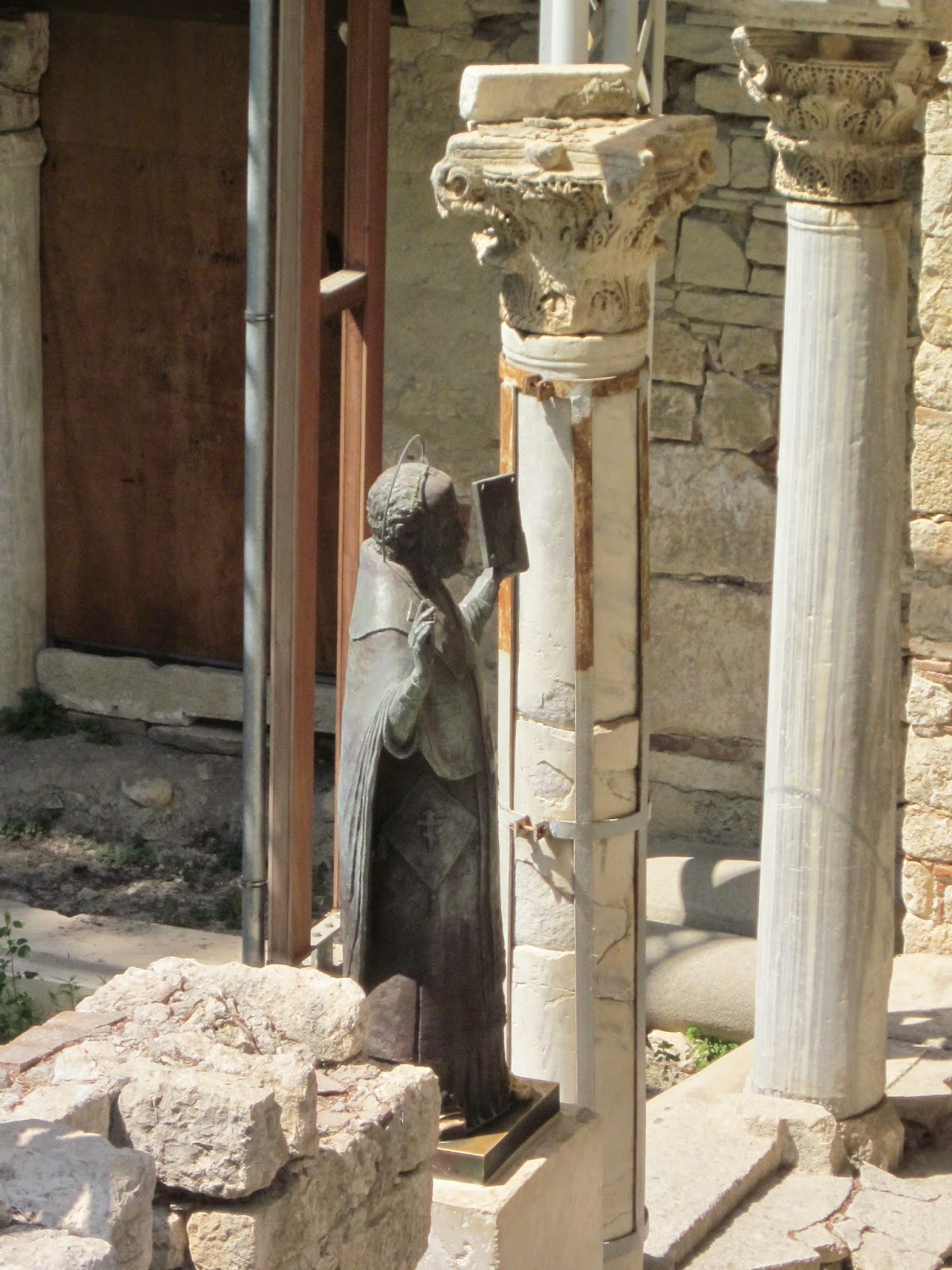 I had the idea that I would be riding blissfully along a seaside road, wind blowing through my panniers and birds chirping as I made my way past. Reality was a bright red streaming salty sweat into my eyes. I audibly gasped my way up and down hills, stopping only to have a temper tantrum about the heat. During one such tantrum I realized that I had thrown my bike up against not a horse trough, but a Lycian coffin from about 700 ad just sitting there on the side of the road. The hand chiseled marks that created the coffin out of one solid piece of stone snapped me out of feeling sorry for myself, I pedaled off reminding myself that I was supremely lucky to be here. 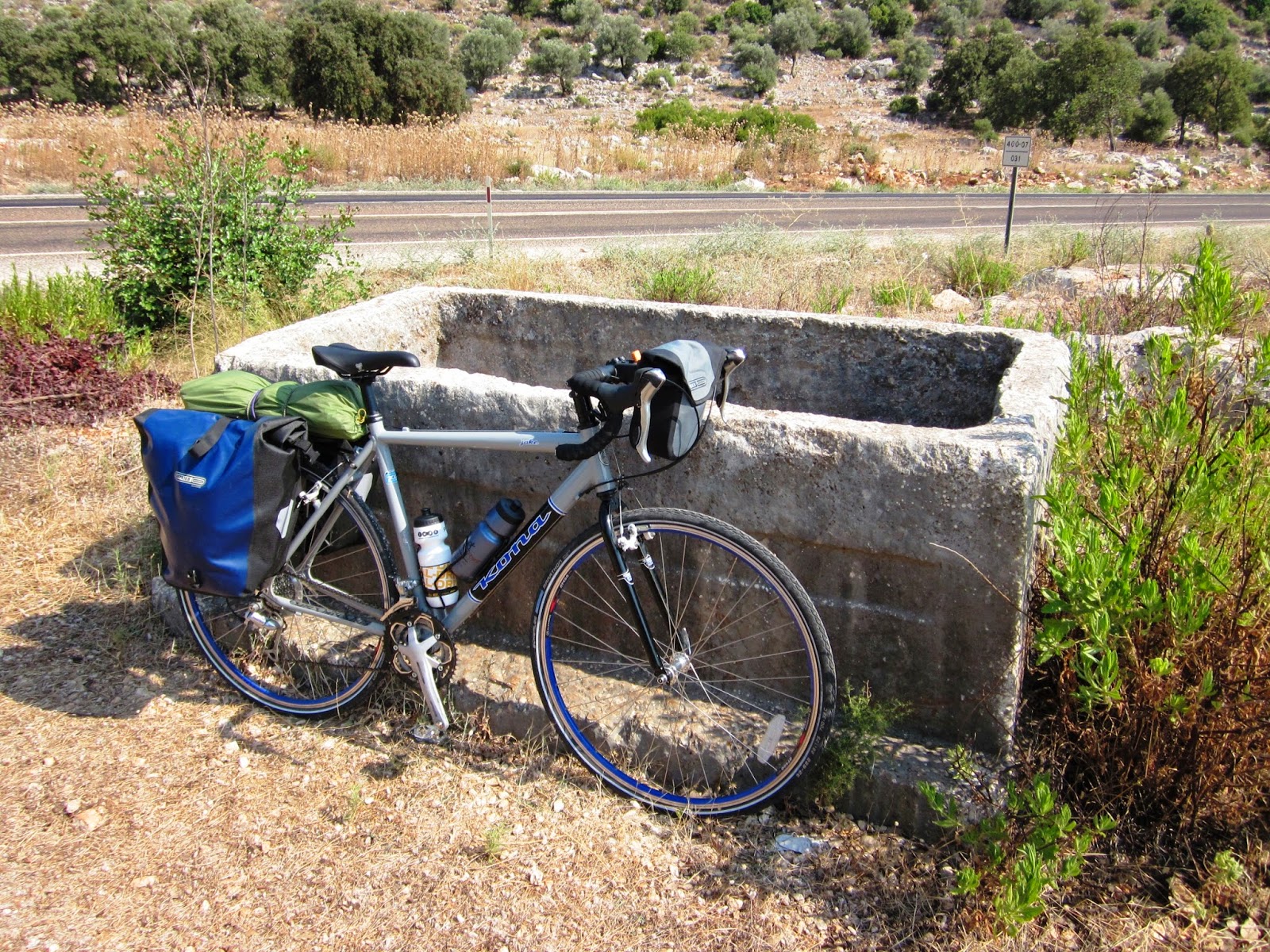 The ride into Kas (pronounced “Cash”) finished with 6 km of pure downhill joy. As I made my way along the last few ups and downs I was escorted by a scooted with two teenage boys doubled on it. They would wait on the side of the road at the top of each hill and cheer as I bike up to them. They gave me the thumbs up and smiled, even offered me cigarettes as I huffed past. Then they would race ahead and wait for me at the next summit, cheering and clapping. At the last hill before the winding decent, they stood next to their scooter jumping up and down yelling “Perfect! Perfect!” as I crested the top.
The view coming into town was like a dream. The setting sun was glowing on the harbor full of sailboats. The hillside was dotted with white stucco houses and the air off the sea was cool and fresh.. A few days in Kas and then onto Efesus! 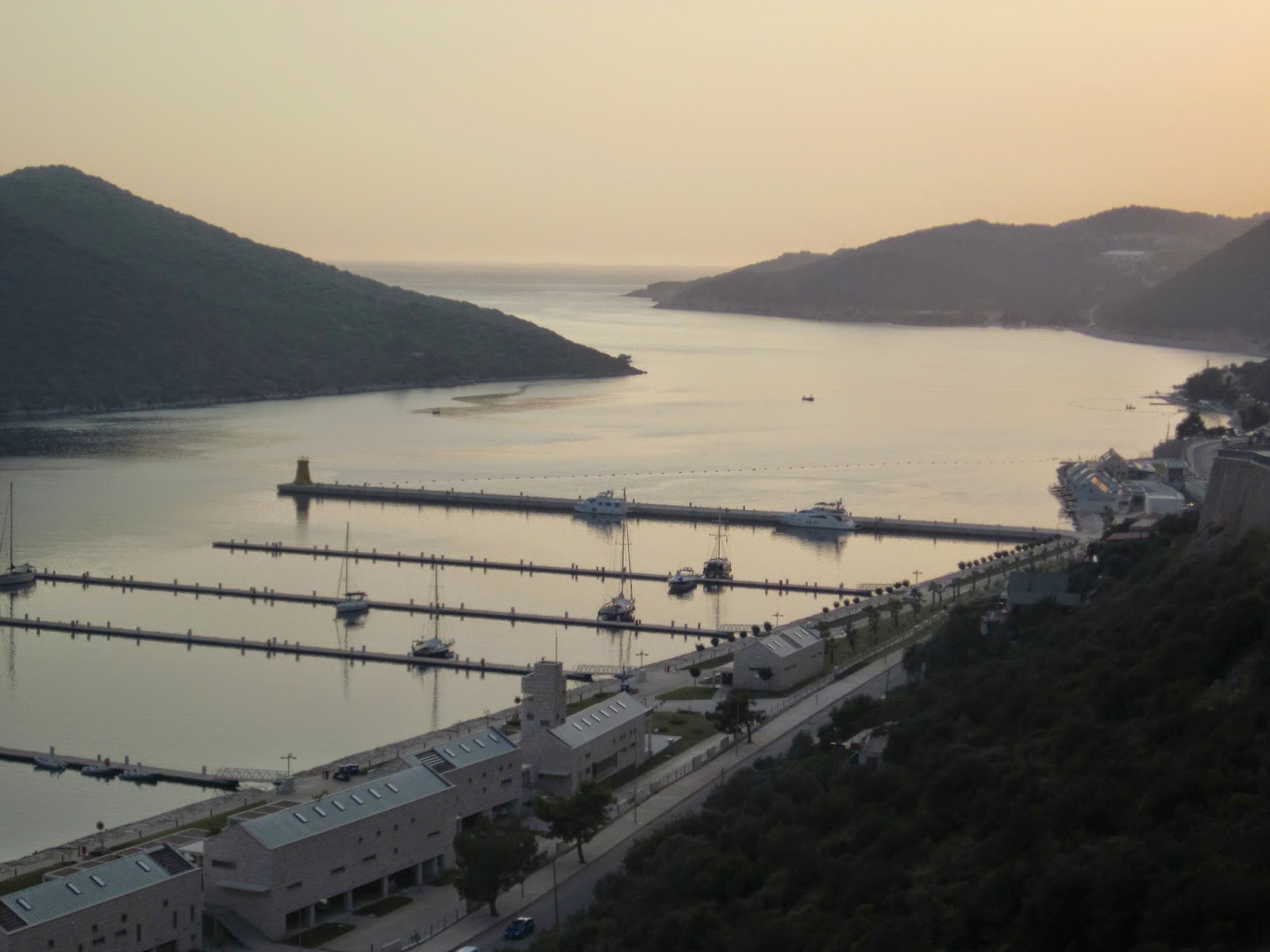